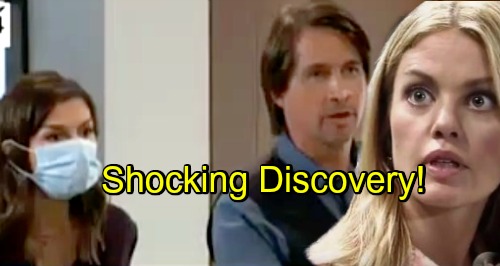 The last time we saw Claudette, she was on a plane headed to Canada when Valentin Cassadine (James Patrick Stuart) sat down by her, and later searches for her revealed that she had committed suicide. It was assumed back then that Valentin had gotten rid of her permanently.

So while Valentin had something to do with her disappearance in Canada, he wanted her to only disappear, not die. Could she also be in the same facility outside of Toronto, Canada where Finn and Anna are, and Cassandra is being brought to, for Finn to bring out of her coma and develop a lifesaving medical protocol for?

While there have been no reports so far of Bree reprising her Claudette role in the near future, any time a supposedly dead character is referred to in a soap opera, especially being shown alive in a photo, there is a good chance of the character showing up even if only an off-screen mention or via a phone call, email, or letter.

There was no hint of Jessica Tuck reprising Cassandra, and yet she is certainly back on GH as fans will see on Thursday’s new GH episode, August 23; so another surprise appearance by Bree wouldn’t be out of the question.

The General Hospital writers appear to be tying up some loose ends in some storylines going way back, largely to create excitement to distract GH fans from the loss of Nelle (Chloe Lanier). Valentin’s searching for Nina’s (Michelle Stafford) grown daughter is a perfect example.

So tying up Claudette’s disappearance may be in the works as well. Keep watching GH and checking General Hospital spoilers frequently to see if Claudette is found in the Canadian clinic. Since we know TPTB at GH are pulling out al the stops to keep fans interested we might get lucky – Nikolas Cassadine (Tyler Christopher, Nick Stabile) might be found there too!