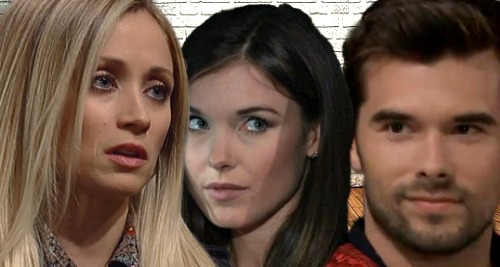 General Hospital (GH) spoilers tease that Chase (Josh Swickard) will keep up his efforts to woo Willow (Katelyn MacMullen). They got off to a rocky start when they first met and Chase took his sweet time about asking Willow out. He also nearly blew it by taking Willow back to his “lair” for dinner instead of having their first date in a public place.

It’s understandable that Willow would be upset about that, but her reaction probably ran deeper than just being offended. There’s clearly a great deal of pain in Willow’s past. Based on all the clues GH has been dropping, it looks like Willow was most likely raped before putting her baby up for adoption.

Naturally, it makes sense that the baby she gave up would be “Wiley.” That’d provide an easy explanation for Willow being stuck in the middle of a Michael (Chad Duell) and Chase love triangle. They’ve both got a connection to Nelle (Chloe Lanier), who is the key to exposing the baby swap bombshell.

However, there’ll be plenty of time for that to play out later. Baby switch storylines always take a while, so GH fans should settle in for more drama. General Hospital spoilers state that Chase will become consumed with thoughts of Willow. He’ll see something special in this young woman, so he won’t want to let this chance slip away.

After chatting Willow up another time or two, Chase will ask her out on another date. He’ll hope this one goes off without a hitch. General Hospital spoilers say this date will happen on December 28, but Willow could easily pull back after this.

If Chase starts pushing for something less casual, Willow may get scared off. She seems wary about letting her walls down and being in a real relationship would force that. Nevertheless, Willow will get some advice during the week of December 24-28. Maybe it’ll help her navigate all this.

GH spoilers say Lulu (Emme Rylan) will think ancient history should stay there. She won’t know Willow’s whole story, but she may know enough to say her past doesn’t have to define her. If Lulu drops a hint to Chase, he could realize some secrets are being kept. Michael isn’t the only one who could learn a thing or two about this potential birth mom!