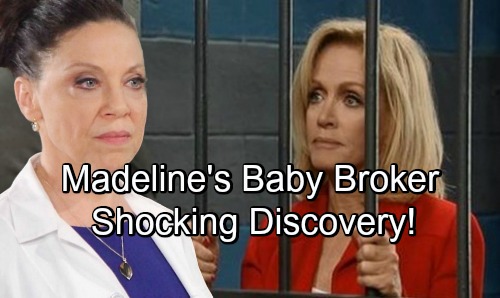 General Hospital spoilers tease that the broker who handled Nina’s daughter for Madeline will prove to be the key to the discovery of who this person is. Once again, GH buzz teases that all roads lead to none other than Liesl Obrecht (Kathleen Gati) as the broker who placed Nina Cassadine’s (Michelle Stafford) baby girl when Madeline Reeves (Donna Mills) wanted to get rid of her.

The first logical place to look and person to question would be Liesl…as Madeline’s sister, she no doubt knew about the baby. Unless Madeline blackmailed her with divulging Nathan’s (Ryan Paevey) paternity to keep Liesl quiet, the only reason Liesl would keep quiet about this is that she herself “got rid of the baby.”

Otherwise, with the secret that Cesar Faison (Anders Hove) was the father of both Liesl’s children made public she would have no more reason to keep this information from Nina. General Hospital buzz claims that Nina might understand Liesl having kept her baby a secret in order to protect Nathan. Nina would not be so understanding if she knew Liesl herself was the baby broker and never told her about her little girl! Now, just to find Liesl….

Once Curtis an or Valentin do track down Liesl, it’s highly unlikely that she would be forthcoming with the truth about Nina’s baby, especially if she was the person who gave her away, or possibly even sold her.

General Hospital fans know that there will need to be a deeper paper trail than Valentin was able to find on his own. Some GH viewers thought it strange that someone trained as a spy would employ a private investigator to find Miss Mystery Daughter.

But since Valentin is not currently working in the WSB or even the DVX, Curtis has a current license and perhaps he can get legitimate access to more information. Additionally, Valentin always prefers to operate at a remove from the action when he can.

Exciting mystery and drama are promised as the path to Nina’s daughter unfolds: stay tuned to GH and keep up with CDL General Hospital spoilers and news to find where it leads!