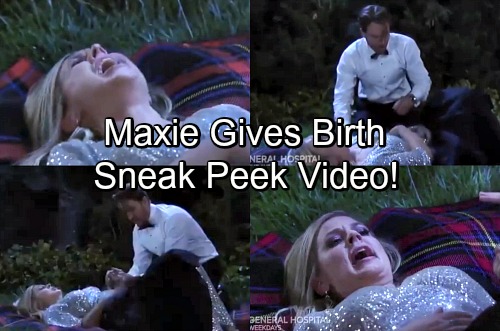 General Hospital (GH) spoilers tease that Maxie’s (Kirsten Storms) baby is on the way, so Peter (Wes Ramsey) will have to take care of business! Maxie’s water just broke in the car and there’s no time to get to GH. She’ll bark orders to Peter and hope he can handle everything that’s about to happen.

Monday’s sneak peek video offers a glimpse of all the drama. General Hospital spoilers say Peter will call for an ambulance and help Maxie get out of the car. He’ll spread out a blanket so Maxie doesn’t have to give birth on the grass. Maxie will do plenty of screaming, but she’ll manage to give more instructions in between bursts of pain.

When Peter assures Maxie that the paramedics are coming, she’ll insist that she can’t wait. No one else is there now, so Peter will have to step up. GH spoilers say Peter will get flustered as he tries to process all this. This is NOT how he expected to end his evening!

Maxie will cry out thanks to another contraction, so Peter will offer to time it. She’ll fire back that they’re way past that. Maxie will insist that her contractions are coming harder and faster. She’ll know that this kid could be coming any minute now.

General Hospital spoilers say Peter will just sit there in shock for a minute. Maxie will wonder if he’s OK or what. She’s the one in need of support here. Fortunately, Peter will soon snap out of it. He’ll realize he needs to get his act together and get Maxie through this.

Maxie will tell Peter to calm down, hold her hand and help her breathe. He’ll gladly pitch in, but he’ll have to do much more soon. The paramedics still won’t be anywhere in sight, so it looks like Peter will have to deliver this baby.