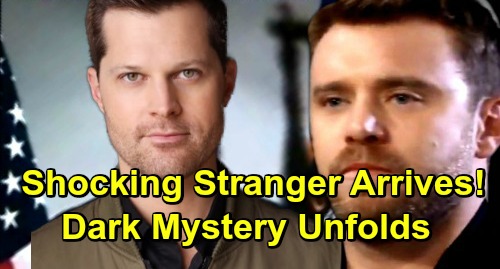 General Hospital (GH) spoilers tease that a big surprise is headed Drew’s (Billy Miller) way. GH fans know that Margaux (Elizabeth Hendrickson) recently gave him the flash drive. Drew was previously adamant about not having the memory procedure, but that was before he could actually hold his memories in his hand. Could Drew start leaning in the other direction soon enough?

The show certainly intends to make this decision tougher. During the week of December 24-28, a stranger will arrive in town. This mysterious person will be connected to Drew’s past, so it won’t be long until he tracks Drew down. Their intriguing meeting should give Drew more to mull over.

Some casting news recently broke about John Patrick Jordan, who’s set to play Peyton Mills around Christmas. He seems like a good fit for this stranger with ties to Drew. Peyton might be somebody who grew up in the same group home as Drew or someone he knew from high school.

Drew opted to skip his high school reunion since he didn’t remember anybody, so an old classmate might be reaching out. Then again, Peyton might be someone who’s connected to Kim (Tamara Braun) as well. Maybe he ran in the same circle as Kim and Drew during their time together in San Diego.

It’s worth mentioning that Kim will do some reflecting that same week. On December 28, General Hospital spoilers say Kim will think back on the past. Perhaps Drew’s visitor will remind Kim of the intense feelings she had for him. Their relationship was short, but they packed a lot of love into it.

Kim obviously still has feelings for Drew to this day. She may be with Julian (William deVry) now, but she cares a great deal for Drew, too. It’s not even just about their history anymore. Kim appreciates the way Drew has embraced being a father to Oscar (Garren Stitt), especially throughout his cancer crisis. This ordeal has brought them closer, so it’s only natural for Kim to wonder what might’ve been.

As for Drew, he’ll be deep in thought after his chat with that stranger. Will their conversation leave him wondering what’s buried? Will Drew get hints about a dark side or other mysteries he needs to unravel?