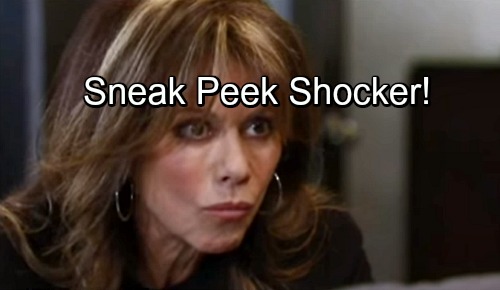 General Hospital (GH) spoilers for Monday, April 2, tease that Finn (Michael Easton) will summon Alexis (Nancy Lee Grahn) for what he thinks is a very important meeting. As soon as she approaches, Finn will start ranting about having hundreds and hundreds of dollars of parking tickets. Finn will hope Alexis can make these “bogus” tickets go away.

Alexis will take a look and marvel at how many Finn received in just three weeks. She’ll argue that Finn would be better off paying them since her services don’t come cheap! After mulling it over for a moment, Finn will contend that he’d rather pay Alexis than “pay the man.” We all know how stubborn Finn can be.

General Hospital spoilers say Alexis will offer a compromise. She’ll agree to fix this mess, but she’ll want a favor in return. Alexis will need Finn to help make their fake relationship disappear. She’ll be sorry that she blurted out the news of this phony romance, but it just sort of happened. Alexis will argue that Julian didn’t have any business asking about Finn, so she got carried away.

Of course, part of Alexis was hoping this would make Julian leave her alone. She obviously still cares about him, but she doesn’t want to head down that road again. Julian tends to butt his nose where it doesn’t belong when it comes to his ex.

Finn will wonder if Alexis thinks this plan will actually work. However, Alexis will just want to go with honesty instead. She’ll note that if Julian finds out about the lie, he’ll somehow tie it back to her feelings for him. That’s just not something Alexis wants to deal with.

General Hospital spoilers state that Finn will come up with an alternative solution. Since Alexis doesn’t want to deceive Julian or anyone else about their sham of a romance, Finn will think they should just make it a real one. Finn will point out that Alexis told Julian they were serious, so why not give that a try?

Alexis may mention their recent hookup and how they agreed to stick with friendship afterward. She could also bring up Anna (Finola Hughes) and Finn’s lingering love for her. Still, Alexis likes hanging out with Finn and could probably learn to love him. She won’t necessarily be against the idea of a relationship, but GH spoilers say she’ll have one big issue to sort out first.

Alexis will find Anna to chat about the man at the center of this love triangle. Anna will claim she isn’t going to be an obstacle, but is that true? We’ll give you updates as other GH details emerge. Stick with the ABC soap and don’t forget to check CDL often for the latest General Hospital spoilers, updates and news.