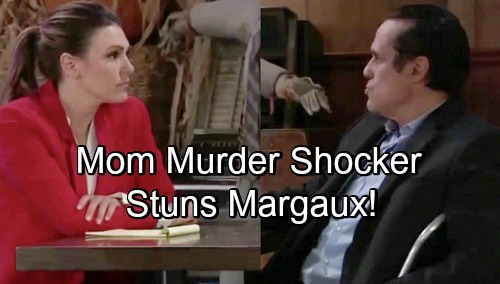 General Hospital (GH) spoilers tease that Margaux (Elizabeth Hendrickson) is in for an unpleasant surprise. She’s been on Sonny’s (Maurice Benard) case ever since she took over the DA position, and she’s determined to bring him down one way or another. And ever since she found out that her father’s body was entombed underneath Charlie’s Pub, she’s really been gunning for Sonny.

Unfortunately for Margaux, she hasn’t had very good luck in her quest to get Sonny. Jordan (Briana Nicole Henry) dropped the investigation into her father’s death due to lack of evidence. And her attempt to get Drew (Billy Miller) to help her in exchange for the flash drive fell flat when he refused to help her.

But still Margaux won’t give up. She’ll remain determined to make Sonny pay for killing her father, which she knows is true but can’t prove. She’ll continue to get in Sonny’s face and proclaim that she’s going to bring him down.

Things will shift, however, when Sonny reveals an ugly truth to Margaux. Thanks to Sam (Kelly Monaco) and Spinelli’s (Bradford Anderson) efforts, Sonny knows that Margaux’s mother Jeannette (Ely Pouget) orchestrated the hit on her father all those years ago. Sonny will dance around the subject with Margaux at first, but eventually he’ll lay it all out for her.

Margaux will be stunned and totally taken aback by the news. She won’t want to believe that her mother could have known anything about her father’s death, as it’s contrary to everything she’s believed her whole life. But Margaux won’t be able to let the information go, and she’ll know that she has to investigate the issue to determine whether Sonny’s telling the truth.

GH spoilers say that Margaux will then reluctantly team up with Sonny to find out the truth about her mother. It will make Margaux sick to think that her mother may have done such an awful thing, but she’ll have to get to the truth. But when she finds proof that her mother did instigate the hit on her father, what will she do?

Do you think that Margaux knowing about her mother’s involvement in her father’s death will lessen her desire to punish Sonny? Stay tuned to the ABC soap and don’t forget to check CDL often for the latest General Hospital spoilers, updates, and news.