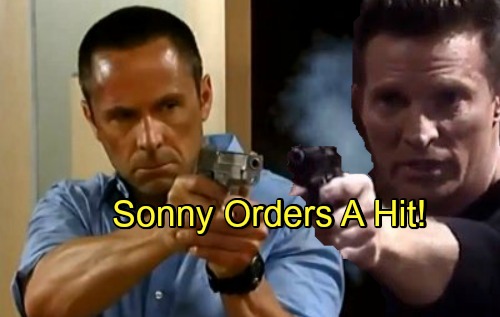 General Hospital (GH) spoilers tease that Julian (William deVry) could soon have a target on his back. Jason (Steve Burton) did his best to cause some permit delays, but that won’t hold Julian off for long. It’s clear that Julian wants to expand Charlie’s Pub and make it the best bar it can be.

Julian recently checked in the Metro Court to avoid living in the renovation mess. That’s proof that he’s serious about this. It also indicates that Julian intends to work quickly. He loves living in that little side room and having no commute. Julian won’t want to stay in a hotel indefinitely, so he’ll be fired up about his fast expansion plans.

Sonny’s (Maurice Benard) pretty busy at the moment, which should cause more issues. Friday’s new GH episode, July 26, has a car crash will leave Sonny worried about Michael’s (Chad Duell) fate. He’ll also have to fret over Carly (Laura Wright) and even Jason (Steve Burton). After Jason holds Mary Pat (Patricia Bethune) at gunpoint, there could be serious ramifications.

Sonny will do his best to keep Carly safe and Jason out of trouble. Since the car accident won’t wipe Nelle (Chloe Lanier) off the map, she’ll remain a problem, too. Of course, we can’t forget about Mike (Max Gail) and his rapid decline. General Hospital spoilers say stopping Julian’s expansion will be low on Sonny’s list of priorities.

Nevertheless, Sonny will have to revisit the topic eventually. By then, Julian could be well on his way to locating the body and gun. Whether he finds it himself or hears the news from a crew member, this discovery could be dangerous. Sonny already obtained a grim promise from Jason. If things spiral out of control, Jason’s willing to take deadly action!

Will Sonny have to order a hit on Julian? Since we know Julian isn’t going anywhere, he’ll survive whatever Sonny has in store. That could lead to a terrible outcome for Sonny. Once Julian is angered, this could turn into an all-out GH war. Julian may take the evidence to the cops and hope it’s enough to bring Sonny down. If there’s indeed residual DNA proof, Sonny could find himself behind bars.