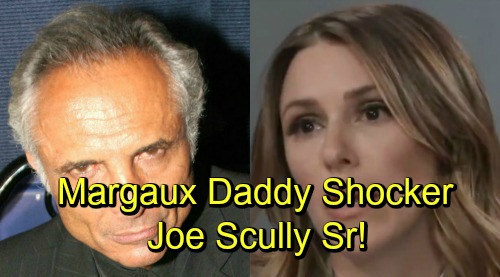 General Hospital (GH) spoilers ask if Sam (Kelly Monaco) found the one piece of evidence that will stop Margaux (Elizabeth Hendrickson) in her tracks? Sonny (Maurice Benard) and Jason (Steve Burton) may threaten to make a paternity accusation public.

Margaux Believes Her Father Was Innocent

Margaux has been led to believe that her father, Vincent Marino, wanted out of the mob. However, GH evidence points to the opposite. Unless Marino was working with the cops to take down Scully (Robert Miano), he was in the mob up to the roots of his hair. No amount of dead father worship is going to change that. Why would Marino move up in the organization if he wanted out of it? General Hospital spoilers claim this story of Margaux’s makes no sense what so ever.

Once he saw a picture of Margaux’s mother, Sonny immediately identified her as Joe Scully’s mistress. Was Marino aware of this affair? Perhaps Marino moved up in the mob because he was letting Scully sleep with his wife. Maybe Scully wanted to make sure Marino stayed busy, so he didn’t discover the affair.

However, if Sonny, a low-level player at the time, knew about the affair, how could Marino not know? Maybe Scully’s reason for having Sonny kill Marino was to cover up the affair. It could be possible that Marino was squeezing Scully for money because he found out about the affair.

Margaux’s mom could have asked Scully to keep Marino moving up, so he didn’t discover the affair – or at least object to it. Regardless of this, Margaux mother was just as much involved with the mob as her father was.

Could Sam Uncover A Paternity Secret?

Now that Sam knows about the affair with Scully, General Hospital spoilers tease that Sam could potentially come up with some very damning evidence about the D.A. – this would be related to Margaux’s paternity .

Suppose this affair had been going on for more than two years before Sonny killed Marino. This long-lasting affair could mean that Margaux’s father was not Vincent Marino but instead, Joe Scully Sr. Technically, Sonny would still have killed Margaux’s father, but Margaux wouldn’t know that.

There is no way Margaux could come up with evidence to have Sonny arrest for killing Scully either. However, this paternity evidence would certainly place the D.A. in a bad light because she would be trying to prosecute a mobster when she too was connected to the mob.

Margaux is adamant about wanting justice for her father, who she thinks is Vincent Marino, but what if her father isn’t who she thought he was? Margaux has worked hard to become a D.A. and having a mob boss like Joe Scully for a father does not fit into her plans. However, Sonny and Jason’s threat to expose this connection may be just enough ammunition to back Margaux off Sonny and Jason for good.

Sam’s research is getting more interesting by that day. Hopefully, we will know the truth soon. Stay tuned to GH on ABC as sweeps heat up and don’t miss CDL for all your latest news, spoilers and recaps.