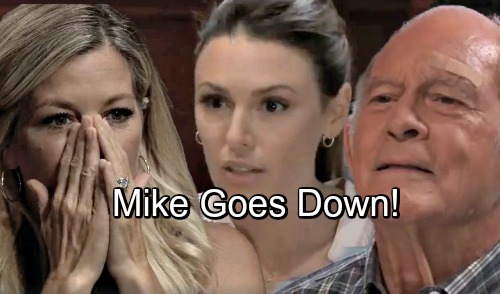 General Hospital (GH) spoilers tease that Sonny’s (Maurice Benard) world will come crashing down. GH fall preview info suggests that Sonny’s past will finally catch up with him. His dark history will unravel in surprising ways, so the Corinthos clan will definitely face more turmoil.

Sonny’s got enough to deal with as it is! Mike’s (Max Gail) decline has definitely made Sonny concerned about the future. He knows it could be dangerous to leave Mike at home for too long. With Josslyn (Eden McCoy) and Avery (Ava and Grace Scarola) around, the stakes are particularly high. Sonny would never forgive himself if Mike hurt one or both of them unintentionally.

At the same time, Sonny hates to lose precious moments with his dad. He’s formed a bond with Mike at last, so he understandably doesn’t want to give that up. Nevertheless, Sonny will have to take the next step eventually. General Hospital spoilers hint that another incident could force Sonny into it.

This storyline will inevitably cross over with another one. GH fans know Sonny disposed of a body along with the murder weapon. He buried the evidence in Croton, but Mike moved it under the foundation of Charlie’s Pub. That secret will be exposed down the road, so be prepared for total chaos.

General Hospital spoilers state that Sonny and Carly’s (Laura Wright) relationship will suffer. The thought of being torn apart forever will fill their hearts with dread. There could also be some tension between them. If Sonny wants to take a bad deal or perhaps rejects a good one, Carly’s temper could flare.

Sonny will also have to consider Mike, who’s in this almost as deep. Maybe that’ll be why Sonny ultimately moves Mike to a memory care facility. It could earn more sympathy for Mike, who’s certainly in no condition to do prison time.

Mike would be more comfortable in a facility of Sonny’s choosing than at Shadybrook, Ferncliff or wherever else he might end up. It’s anybody’s guess with DA Margaux Dawson (Elizabeth Hendrickson) on the case. Speaking of Margaux, she’ll be heavily involved in Sonny’s potential downfall. She’s got a secret reason for loathing him, which could tie in with the Croton drama.

It’s possible Margaux knows or is related to the guy Sonny buried. If not, there’ll be some other strong motive that keeps her hatred going strong. Bottom line, Sonny’s got some rough episodes ahead of him! We’ll give you updates as other GH news comes in. Stay tuned to the ABC soap and don’t forget to check CDL often for the latest General Hospital spoilers, updates and news.