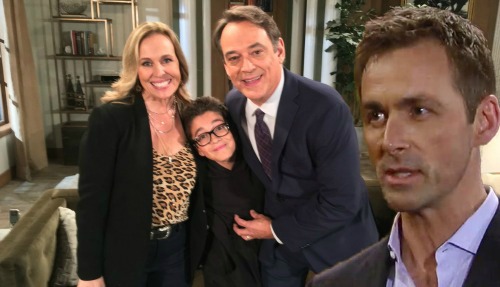 General Hospital (GH) spoilers tease that Spencer Cassadine (Nicholas Bechtel) could be the one who ultimately unmasks Ryan Chamberlain (Jon Lindstrom)! Since Laura Collins (Genie Francis) is Spencer’s grandmother and happens to be married to Dr. Kevin Collins (also Jon Lindstrom), she’ll be in danger along with Spencer when they return. They’ll be living with deadly Ryan soon enough.

Laura will pick up on Kevin’s strange behavior, but she may think it’s because she’s been away for so long. She’ll probably just work on putting the spark back in their romance. Ryan will do his best to sell his end of the love story, but that just isn’t his strong suit. He’ll have a hard time pulling off this part of the ruse.

Still, Laura has no reason to think Ryan swapped places with Kevin. She presumably thinks Ryan’s dead along with the rest of Port Charles. Laura could get some clues eventually, but little smarty Spencer might uncover the truth first. The cutest male Cassadine is quite intelligent. He’s got some Corinthos genes as well, so he knows how to smell a rat.

Plus, General Hospital fans know Spencer can be rather trying at times. He just may get on Ryan’s last nerve. Will Ryan consider taking drastic action to get rid of Spencer? A deadly situation could certainly put things in perspective. Spencer may realize “Kevin” isn’t really Kevin and is out to get him!

Laura is also Charlotte Cassadine’s (Scarlett Fernandez) grandmother, so that could pull Papa Valentin (James Patrick Stuart) into this nightmare. Valentin’s had his fair share of issues with Spencer, but he wouldn’t want to see the boy get hurt. Charlotte would be awfully disappointed in her father if he didn’t step up here.

Perhaps Laura will attempt to rescue Spencer herself and land in grave peril. Ryan could hold them both hostage and plan their horrible murders. How would they escape the clutches of Kevin’s evil twin? GH spoilers say that’s where Valentin might fit. He could come to Spencer and Laura’s rescue when it counts.

Valentin would earn some serious points with a move like that. He led to Nikolas Cassadine’s (last played by Nick Stabile) presumed death, but maybe there’s still hope for redemption. After this potential rescue, several PC residents could see Valentin in a whole new light. Laura, Spencer, Lulu Falconeri (Emme Rylan) and Alexis Davis (Nancy Lee Grahn) would all be grateful.