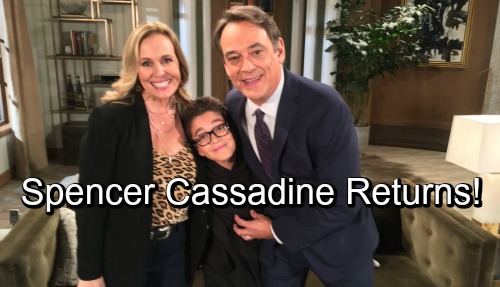 General Hospital (GH) spoilers tease that a familiar face will be back on canvas in the coming weeks. Nicolas Bechtel, who portrays Spencer Cassadine, was recently spotted back filming on the General Hospital set. Nicolas was featured in a photo posted on Twitter by Jon Lindstrom, who portrays Kevin and Ryan on the ABC soap.

The photo included Genie Francis (Laura), Nicholas Bechtel, and Jon Lindstrom smiling big and having a good time on the GH set. Nicholas is shown between the two soap vets, and Jon is embracing him playfully. In the caption, Jon says “Something about Nicolas Bechtel makes me want to tickle him relentlessly.”

It’s a cute photo, and it gives fans something to look forward to. Earlier this summer, Genie Francis announced that she was back on contract with GH, and it left some fans to wonder if Spencer would be joining her. Now that we see Genie pictured with Nicholas and Jon, we have our answer!

Spencer Cassadine hasn’t been seen on-screen since August 2017, when he went back to boarding school in France. In January 2018, he suffered two broken legs in an off-screen skiing accident, and event that abruptly sent Laura to France to care for him.

It should be interesting to watch Spencer interact with Ryan, who is posing as Kevin. Spencer is a pretty perceptive little guy, and he might be able to spot some differences in “Kevin.” Fans have been wondering how long it would take Laura to notice that Kevin was really Ryan, but perhaps it will be Spencer who notices first.

There’s no word yet on whether Nicolas is on recurring status or back on contract. Given that GH tapes about a month in advance, we should see Spencer back on screen very soon. Nicholas can also be seen on Stuck In The Middle on The Disney Channel.

Are you excited to see Spencer come back? Stay tuned to the ABC soap and don’t forget to check CDL often for the latest General Hospital spoilers, updates, and news.