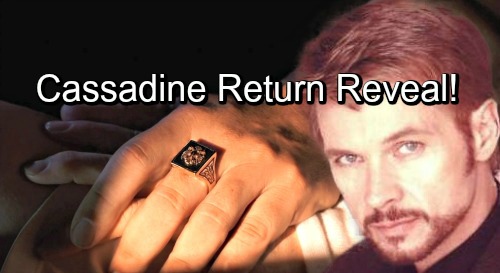 General Hospital (GH) spoilers tease that a Cassadine is set to reenter the picture, but which one? The mystery was set up when someone with a Cassadine ring scooped up Cassandra (Jessica Tuck). GH should let this storyline play out slowly, but it’s never too early to look at the clues and determine where things might be headed.

Some GH viewers assume a Nikolas recast is in the works. Tyler Christopher was known for the popular role, but Nick Stabile took over to wrap up the character’s last stint. Nikolas was killed off, but death rarely sticks on a soap. Even so, there’s no confirmation that Nikolas is making a comeback just yet. It’s a possibility to consider, but speculation is all anyone has to go on when it comes to Nik.

Fortunately, there are some other great options to mull over. Stephen Nichols (ex-Stefan) and Thaao Penghlis (ex-Victor) are both off contract at Days of Our Lives. Neither one of them is appearing on the NBC soap at the moment. Could Penghlis or Nichols be open to a General Hospital return?

There’s been no real buzz about Penghlis’ GH comeback so far. Many General Hospital fans would love to see Victor again, but there’s just not much to back up the idea. Victor’s been associated with drugs before, but he doesn’t quite seem to fit in this story. Helena (Constance Towers) needs to be around to feel the full impact of Victor’s presence, but there have been no signs pointing to her return either.

However, Stefan might be an interesting choice. Let’s think about a potential hint that Nichols dropped on Instagram. On July 24, Nichols posted a video to celebrate his time at Days. The first shot fans had to click on was of his hand, which is all we happened to see of the mysterious Cassadine. This could be a total coincidence, but it’d be a fun clue if Nichols wanted to share something secretly.

The General Hospital scene with Cassandra was said to have been filmed that day, so that’s another intriguing tidbit. It’s doubtful they’d bring Nichols in for just his hand, so that had to be an extra. Still, Nichols might’ve been in the loop on what was playing out on GH. He could know that Stefan’s return is brewing.

Stefan could challenge the validity of Valentin’s claim to the Cassadine fortune. With Stavros (Robert Kelker-Kelly) dead, Stefan would be the oldest living son of Mikkos (John Colicos) and Helena. This would cause more drama and lead to plenty of fantastic story possibilities.