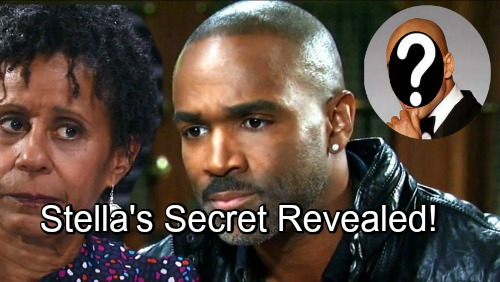 General Hospital spoilers tease that Stella Henry (Vernee Watson) may not be quite as squeaky clean as she pretends to be. Stella has hated Jordan Ashford (currently Vinessa Antoine, soon to be played by Briana Nicole Henry) for many years, having blamed her for the death of her nephew Tommy Ashford (uncast role).

General Hospital viewers will recall that Tommy and his friend Shawn Butler (Sean Blakemore) had gotten into an argument while in the Marines while in Afghanistan, and Shawn accidentally killed Tommy. The argument was over TJ Ashford’s (Tequan Richmond) paternity, because Jordan had cheated on Tommy with Shawn. So now that her other nephew, Curtis (Donnell Turner), is engaged to Jordan, Stella has been fit to be tied.

Stella’s portrayal of herself is that she gave up the chance at a happy married life to the love of her life, a policeman named Marcus, so she could care for her two young nephews when her sister became terminally ill. However, the real truth may be much more soapy and explain why Stella’s hatred of Jordan is so over-the-top intense, and why she is so over-the-top overprotective of Curtis.

General Hospital spoilers say that Jordan, Stella, and Curtis will soon enter family therapy together with Dr. Linda Massey, who will be played by Grey’s Anatomy actress Chandra Wilson. It will be interesting to see what comes up as a result of that therapy.

It is a well-known fact that people tend to despise others who display the same behaviors and characteristics that they hate about themselves, and often become controlling, manipulative, and in some cases, extremely self-righteous. Sound familiar? Could Stella herself be hiding a sinful secret?

General Hospital spoilers tease that Jordan and her history with Tommy and Shawn reminds Stella way too much of herself as a young woman. Maybe Curtis is not really Stella’s nephew, but her son!

We don’t really know a lot about Curtis’ childhood, other than being raised by Auntie Stella along with Tommy Ashford – but when he first came to Port Charles and GH he went by a different last name… Gooden. Maybe there’s a ‘good’ reason for that. Maybe Marcus’ last name was Gooden, and Tommy was Curtis’ cousin, not his brother!

If Stella had Curtis out of wedlock, and her sister took him because Stella couldn’t at the time that might explain the different last name along with being raised with Tommy. But guilt over an out of wedlock pregnancy by itself wouldn’t likely cause Stella’s hatred of Jordan to be as intense as it is.

General Hospital spoilers in the past also connected Stella’s Marcus to Marcus Taggert, (Real Andrews) and it could make sense since Marcus was a detective with the PCPD at one time, but could have previously spent time in the Baltimore, MD area where Stella grew up.

We don’t know where he was between Brooklyn and Port Charles. We know Tommy, Jordan, and Shawn grew up in Detroit, MI, and Curtis knows Shawn, so at some point there was a move to Detroit by Stella’s sister. Perhaps Mr. Ashford’s relatives were there.

Maybe before marrying Mr. Ashford, Tommy’s father, Stella’s late sister was involved with Marcus in Baltimore, and a young and foolish Stella stole Marcus from her, and Curtis was the result. Then, when she became terminally ill and passed away,

Stella stepped up to raise the boys. If Stella’s Marcus was Marcus Taggert, he may have been in Port Charles by that time, having followed Sonny Corinthos (Maurice Benard) with a serious grudge and desire to take Sonny down.