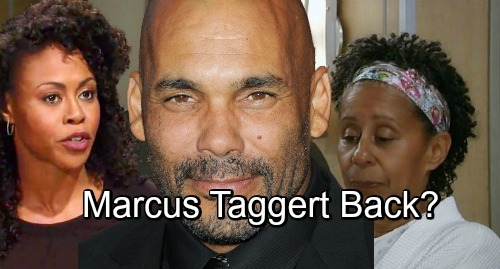 General Hospital (GH) spoilers tease that Stella Henry’s (Vernee Watson) Marcus could be Marcus Taggert (Real Andrews). GH fans may soon find out for sure! In a recent episode, Jordan Ashford (Vinessa Antoine) told Curtis Ashford (Donnell Turner) her latest plan. She’s decided to help Auntie Stella get a life of her own. What better way to make Stella stay out of theirs?

Jordan revealed that Marcus lives nearby, so she’s hoping to reunite him with Stella. He’s the true love she’s always talked about, but is he also Marcus Taggert? It’s an interesting possibility to consider. The timing is interesting as well since Port Charles is down a cop. Dante Falconeri (Dominic Zamprogna) was recruited for a WSB mission, so the PCPD could use a little extra help.

The last time General Hospital viewers saw Marcus Taggert, he had been forced out of Port Charles by Scott Baldwin (Kin Shriner). Scott tagged him as a dirty cop in a campaign to clean up the force. Marcus T. then moved to Portland, where Kristina Corinthos (Lexi Ainsworth) just moved back from. Is that a coincidence or a clue? GH could be throwing in a few details to let us know this is a familiar face.

There are other hints that Marcus Taggert may be Stella’s Marcus. Marcus T. happened to be the partner of Deke Woods, who was Sonny Corinthos’ (Maurice Benard) abusive stepfather. GH fans will recall that Marcus made it his mission to destroy Sonny – as has new DA Margaux Dawson (Elizabeth Hendrickson).

Marcus Taggert’s half-sister, Gia Campbell (Marisa Ramirez), was an assistant to Alexis Davis (Nancy Lee Grahn) before she left for law school. Perhaps Gia and Margaux were classmates. If so, they might’ve made a connection the resulted in Margaux meeting Marcus.

Margaux recently arrived in Port Charles with a very apparent agenda. She’s determined to take Sonny down and some secrets are driving that plan. All this could pave the way for Marcus Taggert to reenter the picture and finish what he started. He could become a useful ally to Margaux eventually.

Jordan intends to meet with Stella’s Marcus, so GH viewers should get answers before long. Is Stella’s Marcus actually Marcus Taggert? General Hospital spoilers say this mystery will unravel and bring some bombshells. We’ll give you updates as other news comes in. Stick with the ABC soap and don’t forget to check CDL often for the latest General Hospital spoilers, updates and news.