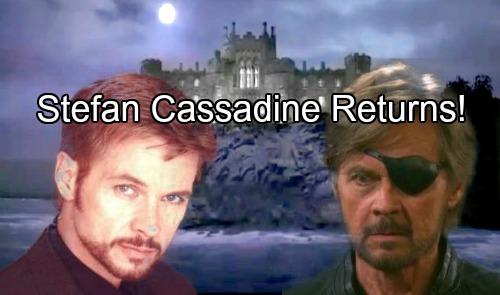 General Hospital (GH) spoilers tease that a familiar face could make a comeback. Stephen Nichols is currently airing as Steve Johnson over on Days of Our Lives. However, DOOL buzz suggests that contract negotiations broke down. Word has it Nichols hasn’t been filming since March, so he’s most likely done at the NBC soap. Of course, that could free Nichols up for a return stint as Stefan Cassadine on GH!

Frank Valentin, General Hospital’s executive producer, is always trying to shake things up. Now that Peter August’s (Wes Ramsey) latest storyline is winding down, maybe it’s time to move away from the Faisons and focus on the Cassadines. GH would have the perfect setup for Stefan’s return.

Valentin Cassadine (James Patrick Stuart) is helping Alexis Davis (Nancy Lee Grahn) out with some family history. She wants to know more about their father, Mikkos Cassadine (John Colicos), so this is a great opportunity to bring another sibling back in the picture. This could bring so much drama.

Stefan could really throw Valentin for a loop. He’s a legitimate heir to the Cassadine fortune, so he might take Valentin to court and try to get it back. Valentin could have a fierce fight on his hands. Stefan would undoubtedly be a formidable foe, so this battle would really heat up GH.

Days has been gaining in the ratings lately, especially after all their Daytime Emmy wins. However, plenty of DOOL fans are upset about Nichols’ departure. General Hospital might be able to capitalize on that by snatching Nichols’ up for a return arc. It’d be a good strategy to beat the competition and please longtime GH viewers as well. Most soap watchers are usually up for a blast from the past.

Would you like to see Stephen Nichols back as Stefan Cassadine? Do you think it’d be a smart move for GH? What other exciting comebacks would you be interested in? We’ll give you updates as other General Hospital news comes in. Stay tuned to the ABC soap and don’t forget to check CDL often for the latest General Hospital spoilers, updates and news.