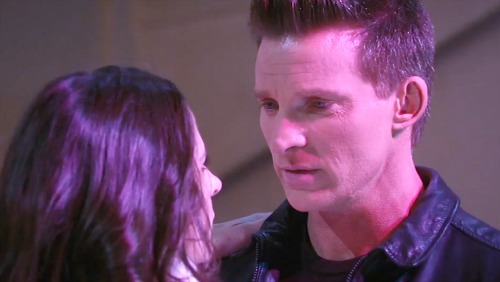 General Hospital (GH) spoilers tease that Sam (Kelly Monaco) has quite a journey ahead of her. She’s taking some time for herself right now since she needs to make a huge decision. Sam has deep feelings for both Drew (Billy Miller) and Jason (Steve Burton), so she’s unbelievably torn. These twins have very different personalities, but there’s lots to love about each one of them.

Sam stuck with Drew for quite a while after Jason returned, which was understandable. She didn’t want to hurt her hubby, especially when he was losing his identity. Sam was also scared of destroying the life they’d built together. Standing by Drew was a perfectly reasonable reaction at that point in the story.

However, Sam couldn’t deny her feelings forever. It’s great that she finally reached a place of honesty. General Hospital spoilers say the next phase of this hot plot should be especially gripping. It’s all about starting a new chapter.

Sam needs a fresh start, but will it be in her relationship with Jason or Drew? Will she return to her ex’s familiar embrace or begin to love her current husband for who he is now? There’s a good chance Sam will explore both of those options, but GH has to play all the angst and growth first.

Naturally, there are plenty of fans on both sides of this love triangle. During a recent Twitter chat, Steve Burton addressed the battle for Sam’s heart. One fan tweeted, “I hope Sam chooses Jason.” Burton quoted the tweet and replied, “Stay tuned.” He added a thinking face emoji as well.

Burton obviously could’ve ignored the tweet and chosen another subject to tackle. The fact that he commented at all gives some hope to “JaSam” fans. General Hospital spoilers hint that Jason and Sam will reconnect on an intense level when she returns.

Of course, “Dream” supporters shouldn’t get too glum just yet. It seems likely that this is all part of the journey we mentioned. Sam probably needs to reunite with Jason to truly find closure. Monaco and Miller have been open about their desire to work together, so Sam and Drew may work it out at the end of all this.

It makes sense that General Hospital would want to play the “JaSam” side of this love triangle and possibly let Drew heat things up with Kim (Tamara Braun). Soaps have some serious airtime to fill year after year! There’s no point in leaving drama on the table.

In other words, you can bet on “JaSam” first, but don’t be surprised if Sam and Drew reunite down the road. We’ll give you updates as other GH news comes in. Stick with the ABC soap and don’t forget to check CDL often for the latest General Hospital spoilers, updates and news.