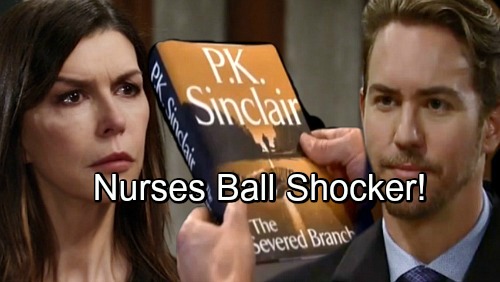 General Hospital (GH) spoilers tease that Anna (Finola Hughes) will face an evening full of twists and turns. She’ll be attending the Nurses Ball this year, but she’ll have a lot on her mind. That should put a bit of a damper on the celebration.

On the bright side, Robin (Kimberly McCullough) and Emma (Brooklyn Rae Silzer) will be in town for the festivities. Anna will certainly enjoy hanging out with them on this special occasion. However, it’ll become increasingly difficult to keep her loved ones in the dark on her unsettled mood. Emma and Robin should wonder what Anna’s hiding pretty soon.

Of course, Anna will have two main problems to mull over. The first one is less important, but he’ll still weigh heavily on Anna. General Hospital spoilers say Anna’s feelings for Finn will bubble up again. She’s tried to let him go, but it’s clear that there’s a lingering connection. Anna will wish she had her life together and could just follow her heart. However, things are never that simple in Port Charles!

General Hospital spoilers state that Anna’s love life will remain complicated. The same goes for her family issues. Anna will definitely dwell on Heinrik at this party, too. She can’t help but worry about her son, especially since Jason (Steve Burton) has a plan that’s about to rev up. Anna will sense that Jason’s closing in on the truth like she is, so she’ll have concerns about keeping Heinrik safe.

Naturally, some secrets are set to explode at the Nurses Ball which begin’s on May 16. GH fans will see an epic Friday, May 18, cliffhanger, so maybe at least part of the truth will come out. If Peter is exposed as Heinrik, Anna will be thrown for a loop. She’ll have to decide how to handle this at some point.

GH buzz says it’s also possible that Peter will learn Anna’s his mom instead. There’s even a chance they’ll both get the info they’ve been looking for at the same time. Whatever the case, General Hospital spoilers say the drama will continue into the week of May 21-25. The Nurses Ball will launch the next phase of this dangerous storyline, so stay tuned.

Are you anxious for some shocking secrets to be revealed? We’ll give you updates as other GH news comes in. Stick with the ABC soap and don’t forget to check CDL often for the latest General Hospital spoilers, updates and news.