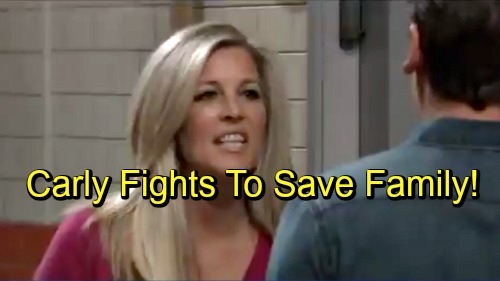 However, Michael will give Carly an apology pretty soon. He may feel like it was wrong to shut her out. Michael needs Carly now more than ever, so he might choose to lean on her after all. Of course, Carly will have to juggle her kids’ problems in the near future. Oscar (Garren Stitt) has an inoperable brain tumor, so Josslyn (Eden McCoy) has a whole lot of heartache ahead of her.

At first, Oscar will try to keep Josslyn out of the loop. He may even be tempted to break up with her and not offer a reason. Oscar will have a hard enough time trying to process this himself. He’ll hate the thought of looking Josslyn in the eyes and telling her that he’s dying. The last thing Oscar wants to do is leave Joss behind. He can’t help that he’s sick, but he’ll still feel like he’s abandoning her somehow.

Nevertheless, Oscar can’t keep avoiding this conversation. He’ll ultimately have to confess and deal with Josslyn’s pain. General Hospital spoilers say Josslyn will struggle like never before. She feels a real connection with Oscar, so this will be a devastating blow. Joss will feel like she’s found her true love early in life. She’ll wonder if she’s about to lose the only guy she’s meant to be with.

When Carly gets updates on this nightmare, her heart will break right along with Josslyn’s. She’ll desperately want to fix this, but that’s not something she can do. Carly can only pull Joss close and let her know she’s there for her. GH fans know that it’ll mean the world to Josslyn. She’ll certainly appreciate having some support as Oscar inches toward the grave.

Plus, Carly will continue to worry about Mike’s (Max Gail) decline and Sonny’s (Maurice Benard) legal issues. She’ll fear that her hubby could end up in prison and drag Mike down with him. General Hospital spoilers say Carly’s sure to feel overwhelmed. Is this whole family on the verge of falling apart? Carly will do her best to be the glue that binds them, but it won’t be easy.

It sounds like there’ll be plenty of sad news in Port Charles. Let’s hope some soapy miracles and shocking discoveries change the game eventually. We’ll keep you posted as other GH details emerge. Stay tuned to the ABC soap and don’t forget to check CDL often for the latest General Hospital spoilers, updates and news.