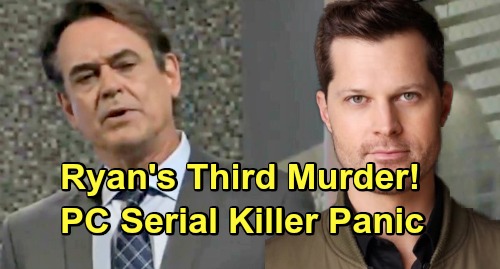 General Hospital (GH) spoilers tease that a third horrifying murder will rock Port Charles. After Mary Pat Ingles (Patricia Bethune) was killed, people were naturally disturbed and curious. Kiki Jerome’s (Hayley Erin) murder came next and that was even more shocking. It’s not like Kiki had a ton of enemies around town, so it added to the mystery for PC residents.

The cops have a hunch these two murders are connected, but they don’t have proof of that yet. Ned Quartermaine (Wally Kurth) isn’t eager to spread the word about that possibility either. He knows the thought of a serial killer being on the loose could bring total panic. However, there’ll be no denying it after another corpse appears and the homicide follows a similar pattern.

Ryan Chamberlain’s (Jon Lindstrom) third victim will indeed lead to chaos in the community. Of course, no one will realize he’s behind this string of deaths. Nobody even knows Ryan is alive, so he’ll be able to keep his charade going for a while. You can bet Ryan will cause even more destruction between now and whenever he ultimately gets caught.

As for the identity of this murder victim, it might be a TV producer named Peyton Mills (John Patrick Jordan). It’d be nice for GH to mix it up and go with a male victim this time. It looks like Peyton will get on Ryan’s bad side, so he could pay with his life.

Olivia Quartermaine (Lisa LoCicero) will make a startling discovery on Friday’s new GH episode, December 28, which may mean Ryan will leave the body at the New Year’s Eve bash. It’ll happen early due to Monday’s preemption and a spectacle like this would certainly be Ryan’s style! He likes to make his crimes public in a big way.

Mary Pat’s head was found on Halloween and Kiki’s cold body was found on Thanksgiving. Ryan may add New Year’s Eve to his list of horrific holidays soon enough. General Hospital spoilers say the aftermath of Ryan’s latest murder will bring some freak-outs. No one will feel safe in Port Charles anymore!

Of course, the longer Ryan’s killing spree goes on, the more likely it becomes he’ll get caught. Will Ryan make a mistake or get too cocky with his clues? We’ll give you updates as other General Hospital news comes in. Stay tuned to ABC’s GH and don’t forget to check CDL often for the latest General Hospital spoilers, updates and news.