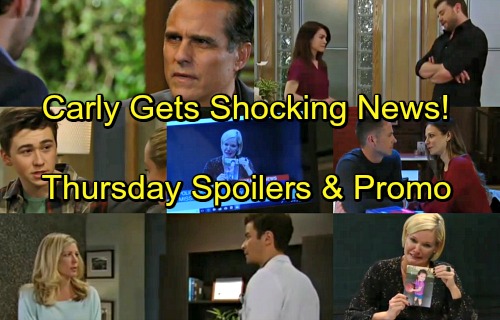 Ava will get a TV station to put up Avery’s picture and listen to her dire plea. She’ll sob as she begs the public for help, so let’s hope the exposure pays off. Meanwhile, Chase (Josh Swickard) will push Sonny’s (Maurice Benard) buttons. He recently hinted that Sonny’s business might be the reason for all this. Perhaps Chase will revisit that theory and contend that the disappearances are mob-related.

Chase knows that Sonny must have major secrets, so he may mention that during their conversation. Sonny will suggest he doesn’t know what Chase is talking about. He’ll maintain that Mike simply wandered off with Avery, but he’ll grow concerned about Chase’s digging. The whole “field in Croton” thing still has Sonny on edge!

Elsewhere, Josslyn (Eden McCoy) will fret over Avery’s fate. She’ll hope for good news, but she’ll be stuck with a waiting game instead. General Hospital spoilers say Oscar (Garren Stitt) will wish there was something he could do. Joss may suggest that just being by her side is enough. These two are growing closer every day, so expect some warm moments on Thursday’s episode.

At GH, Griffin (Matt Cohen) will summon Carly (Laura Wright) for a chat. He’ll want to discuss her recent tests and offer his opinion on what she’s dealing with. Griffin will insist that there’s nothing physically wrong with Carly. He’ll be more worried about her mental state, so he’ll probably recommend a session with Kevin (Jon Lindstrom).

Speaking of Kevin, it seems he’ll meet with Franco (Roger Howarth) to provide guidance. Unfortunately, Franco will get agitated during this appointment. He’s battling a very troubled past, so one can blame him for being upset.

Nearby, General Hospital spoilers say Drew (Billy Miller) will bump into Liz (Rebecca Herbst). He’ll ask how Franco’s doing, so she might point out they’re taking it once step at a time. It’ll be a while before Franco can put his history behind him, but he’s hanging in there.

Across town, Kim (Tamara Braun) will once again assure Julian (William deVry) that she’s cool with their easy-breezy romance. She’ll reiterate that Drew is her past, so she’s right where she wants to be. Of course, it probably won’t be long until Kim changes her mind about that!

Will Kim drift toward her former flame soon? We’ll give you updates as other GH details emerge. Stick with the ABC soap and don’t forget to check CDL often for the latest General Hospital spoilers, updates and news.