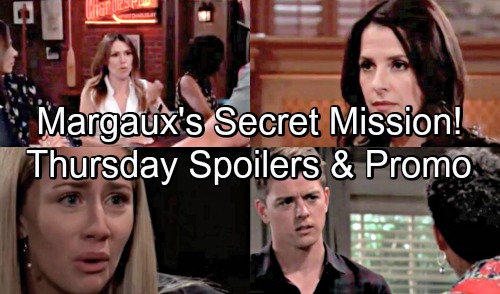 General Hospital (GH) spoilers for Thursday, August 16, tease that Liz (Rebecca Herbst) will get some support from a friend. At GH, Liz will seem glum when she runs into Terry (Cassandra James). That hospital job apparently panned out since Terry will be wearing a lab coat. She’ll ask Liz what’s wrong and do her best to offer some comfort.

Liz might still be upset over unruly Cameron (William Lipton) or perhaps Griffin’s (Matt Cohen) suspension. Regardless, she’ll appreciate having Terry around to confide in. Meanwhile, Kristina (Lexi Ainsworth) will open up to Sam (Kelly Monaco). She put on a smile during their little family reunion, but Sam could see right through her sister’s charade.

Sam will keep pushing until Kristina’s walls come down on Thursday. Kristina will admit that she feels like she’s drifting. It sounds like Kristina and Parker (Ashley Jones) are growing apart, so Sam may wonder what this means for their future. If things aren’t going to work out, perhaps there’s a chance Kristina will extend her stay in Port Charles.

Other General Hospital spoilers say Jordan (Vinessa Antoine) will decide she’s had enough. She’ll tell Curtis (Donnell Turner) that she’s done tip-toeing around Aunt Stella (Vernee Watson). Jordan has tried to be patient with her, but she just can’t take it anymore. Curtis may have to take a stand if he wants to keep his relationship on solid ground.

Speaking of Stella, she’ll give Michael (Chad Duell) some useful advice. It appears his emotions will bring on a stubborn streak. Stella will suggest that Michael may not look like his father, but he acts like him. Sonny (Maurice Benard) doesn’t like to accept help most of the time, so that might be why Stella finds Michael so similar. He may push away people who want to assist with Jonah’s funeral.

Stella will undoubtedly urge Michael to let himself grieve and lean on his loved ones. It’s an important part of the healing process. Of course, Michael has no idea that his son’s still alive. That revelation is sure to shake things up down the road, so stay tuned.

Carly (Laura Wright) will deal with another problem child in Thursday’s new GH episode. She’ll confront Josslyn about the stolen stuff Mike (Max Gail) found in the closet, so Joss will have to provide an explanation. General Hospital spoilers say Josslyn will break down in tears over her shoplifting. She’ll realize she had no reason to steal, but she was spinning out and did it without really knowing why.

Josslyn will ask what’s wrong with her, but Carly may insist that she’s just had a rough time. Their whole family’s been through a lot, so Carly should give Joss a pass on her latest mistakes. At Charlie’s Pub, Margaux (Elizabeth Hendrickson) will butt in Kim (Tamara Braun) and Julian’s (William deVry) conversation. She’ll overhear them talking about Sonny, so she’ll want the scoop.

Julian and Kim may not have much to offer, but this is just another example of Margaux’s Sonny obsession. Why is she so determined to bring him down? It seems like this is about more than targeting a mob boss. If Margaux’s got some past connection that she’s hiding, she could have a very good reason for her vendetta.