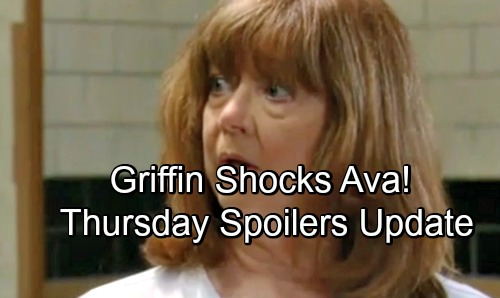 General Hospital (GH) spoilers for Thursday, August 2, tease that Carly (Laura Wright) will worry about her future. She can’t bear the thought of getting caught and being sent back to Ferncliff. That was one of the worst experiences of Carly’s life.

As Carly frets, Jason (Steve Burton) will do whatever he can to comfort her. He’ll assure Carly that she’s not going back to that place. Thanks to Sam (Kelly Monaco) and Curtis (Donnell Turner), Jason may be able to keep that promise. They’ll tell a few fibs as Ferncliff and try to pry some info out of Mary Pat (Patricia Bethune).

Once they’re through, Sam will have Carly’s ECT consent forms in her possession. Whether Mary Pat forged the signature or got a sedated Carly to sign them, they’ll be taken out of the building. Sam will hope that by stealing these forms, Diane (Carolyn Hennesy) will have the proof she needs. They can show Carly was going to have electroconvulsive therapy against her will.

Other General Hospital spoilers say Nelle (Chloe Lanier) will feel defeated. She’s the kind of gal who gets knocked down and always finds a way to get back up. Unfortunately, Nelle will think she’s cornered this time. She’ll tell Kim (Tamara Braun) that after her GH release, she’s headed to the slammer.

Nelle may consider throwing in the towel, but her fighting spirit will return sooner or later. At some point, GH fans can expect a getaway plan. There’s no guarantee Nelle will be able to flee, but it’s good to know this schemer’s going to try. Any great villain should fight to the bitter end.

Meanwhile, Michael (Chad Duell) will reflect on the death of his “son.” Since he believes his own baby died, Michael just won’t know what to do with himself. His loss will seem unbearable. Luckily, Michael’s got plenty of people to help him through this. Sonny (Maurice Benard) will stay right by Michael’s side and give him words of comfort.

Across town, Lulu (Emme Rylan) will consider an intriguing possibility. During another chat with Chase (Josh Swickard), the topic of an accomplice will come up. Lulu will ask if he thinks someone helped Nelle. They may agree Nelle had a partner in crime, so Ava’s name could land on the suspect list. She was just intruding on Chase and Lulu’s conversation, which could leave her fresh in their minds.

Of course, Ava will be busy trying to cover her tracks. She needs to dispose of that baby blanket and eliminate the risk of exposure. It looks like Ava will have that blanket in a bag by the docks. Suddenly, a sweaty and shirtless Griffin (Matt Cohen) will jog over. He’ll be surprised to see Ava, but she’ll be the truly shocked one. You can bet this encounter will leave Ava rattled and guarded.