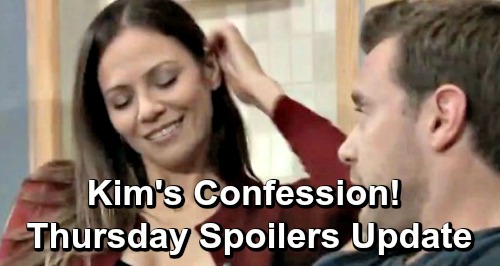 General Hospital (GH) spoilers update for Thursday, December 13, tease that Jason (Steve Burton) will have a problem to tackle. Carly’s (Laura Wright) rage will be out of control, so Jason will try to help her calm down. Of course, this is Carly we’re talking about! It’s not easy to make her chill, even when her mellow bestie’s pushing for it.

“Kevin” aka Ryan (Jon Lindstrom) and Ava (Maura West) seem to be Carly’s main sources of anger lately. One of them will probably do something else to shake things up. Regardless, Jason will just have to face Carly’s fury explosion and help her through it when she finally cools off.

At GH, Sonny (Maurice Benard) will decide to pay Oscar (Garren Stitt) a visit. He’ll have a gentle talk with Josslyn’s (Eden McCoy) boyfriend and secure a promise from him. Sonny may urge Oscar to hang in there for Joss’ sake. Oscar isn’t convinced this clinical trial will really work, but he needs to keep fighting anyway. He may vow to do that and hope he can still have a future with Josslyn when this is all over.

Since Kim (Tamara Braun) will give Oscar some space, she’ll have a chance to connect with Drew (Billy Miller). General Hospital spoilers say Kim will have a confession to make. She’ll smile when she shares it, so it must involve something fun. Kim might recall some cute memory of Drew from their fling so many years ago. Drew could remember that and much more with that handy-dandy flash drive!

Other General Hospital spoilers say Cameron (William Lipton) will face additional heartache. During a conversation with Josslyn, she’ll be happy they’re still friends. Cam will pretend it’s all good, but he’ll be hurting deep down. He wants to be with Josslyn romantically, but that’s just not an option right now.

Julian (William Lipton) will offer Cameron some guidance later. Unfortunately, things will get worse before they get better. Cam will revert to troublemaker mode in the week ahead, so this mess will really take a toll.

Over with Curtis (Donnell Turner) and Sam (Kelly Monaco), they’ll keep their minds on a tricky case. Sam’s pondering a mystery that connects to her past, so it won’t be long until another bomb drops. Curtis will feel like they have to rethink their strategy and try to uncover the truth another way.

Meanwhile, Valentin will do whatever he can to preserve that shot. He’s worked too hard to lose everything now. Liesl Obrecht (Kathleen Gati) knows Sasha’s a phony and she’s threatening to blab unless she gets her freedom. That’s why Valentin will call on Peter (Wes Ramsey) to help him.

When Peter realizes just how desperate Valentin is, he’ll suggest that Liesl’s proof must be quite incriminating. General Hospital spoilers say Valentin will hope he can keep his reunion dreams intact! We’ll give you updates as other GH news comes in. Stick with the ABC soap and don’t forget to check CDL often for the latest General Hospital spoilers, updates and news.