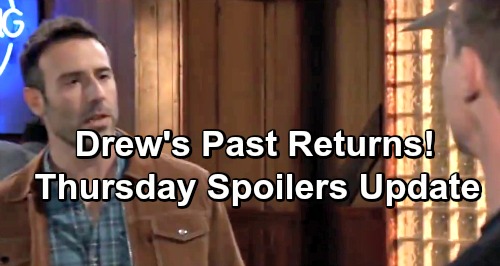 General Hospital (GH) spoilers for Thursday, December 27, tease that Jason Morgan (Steve Burton) will be caught off guard. A man he doesn’t know will walk up to him and make the wrong assumption. GH fans know Drew Cain (Billy Miller) used to look like his twin brother, but not anymore. Jason’s the only one with that face now, but this mystery guy won’t be in the loop.

This is somebody from Drew’s past, so he’ll be confused about the whole situation. Jason should be confused as well, but everything will click into place when Drew’s name comes up. The stranger will learn the truth and most likely try to track the real Drew down. These two may have a lot to talk about, so let’s hope this leads to some answers about Drew’s history.

Meanwhile, Drew will assure Kim Nero (Tamara Braun) of his support. He’ll comment on how much they’ve been through this year and hope for a brighter 2019. Both Drew and Kim just want a long, happy life for their son. Oscar Nero (Garren Stitt) is part of a clinical trial that could save his life, so his parents will cling to this possible solution.

Over with Sonny Corinthos (Maurice Benard) and Margaux Dawson (Elizabeth Hendrickson), they’ll have a chat about leverage and how it relates to Jason. Margaux’s got nothing, but Sonny will hint that he’s in control. It’s not like Jason ever really goes against Sonny anyway!

Of course, Jason and Sonny’s friendship could hit a snag thanks to the Margaux drama. Carly Corinthos (Laura Wright) told Jason that if Sonny cheats, she won’t take him back this time. That’s why Jason will seek Sonny out on Thursday and offer a stern warning. He’ll make it clear that Carly means business, so Sonny had better be on his best behavior.

Elsewhere, Laura Collins (Genie Francis) will give Felicia Scorpio (Kristina Wagner) some disturbing updates. She’ll explain that Kevin Collins (Jon Lindstrom) may be having another breakdown, but that’s only because she’s in the dark on the twin switch. Ryan Chamberlain (Jon Lindstrom) is the reason Kevin’s loved ones are so concerned.

At GH, General Hospital spoilers say Ryan will be annoyed by a surprise visitor. It looks like a TV producer named Peyton Mills (John Patrick Jordan) will become his latest pest. Peyton could face deadly consequences for pushing Ryan too far!

Across town, Anna Devane (Finola Hughes) will have an important request for Dr. Hamilton Finn (Michael Easton). She’ll encourage him to move in with her and Finn just might take the leap. They’re in a good place, so cohabitation makes sense. What better way to start off the new year?