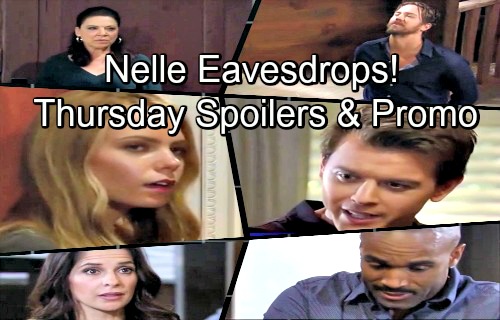 General Hospital (GH) spoilers for Thursday, July 12, tease that Jordan (Vinessa Antoine) will have a favor to ask. She’ll need some advice from Stella (Vernee Watson), but this conversation could be tricky. Jordan knows she isn’t Stella’s favorite person, but she hopes the tension will fade in time. Asking Stella for guidance should prove she values her opinion. At least Jordan’s making a real effort!

Elsewhere, Curtis (Donnell Turner) will suspect that Nina’s (Michelle Stafford) keeping secrets. Sam (Kelly Monaco) will agree that something’s definitely up. They’ll wonder if Nina knows where Peter (Wes Ramsey) is or who’s behind his kidnapping. If Sam and Curtis really think this through, it shouldn’t be too hard to make the Liesl Obrecht (Kathleen Gati) connection.

Meanwhile, Nina will try to stall Valentin (James Patrick Stuart). She helped Liesl move Peter to the stables at Wyndemere, but only because no one was supposed to be there for a few days. Now there’s an issue with some of the horses, so Valentin’s about to spoil the plan.

As Valentin waits on the launch, an out-of-breath Nina will catch up with him. She’ll think of a reason to delay Valentin, but will he buy it? Nina may have no choice but to play the “maybe we can work this out” card.

Valentin could get a bit suspicious since this is so out of the blue. Nina certainly wasn’t open to a reunion during their last chat, so Valentin may ask what changed in 10 minutes. While Nina handles this crisis, Peter will be feeling awfully smug. He’ll sense that Liesl’s starting to panic over Nina’s messages. Peter will gloat about his previous warning to Dr. O and anxiously await his rescue.

Across town, General Hospital spoilers say Nelle (Chloe Lanier) will eavesdrop on Michael’s (Chad Duell) meeting with Alexis (Nancy Lee Grahn). Michael will suggest he wants to get this out of the way as soon as possible. He’ll be eager to file the prenup and get the ball rolling on this wedding.

Nelle will seem concerned by Michael’s comments. She may feel like Michael’s just going through the motions for the baby’s sake. Nelle might sense that this isn’t going to work out like she wants. That could push her in Chase’s (Josh Swickard) direction, which is definitely what the guys are hoping for.

At GH, Sonny (Maurice Benard) will fill Mike (Max Gail) in on Michael’s nuptials. When Sonny seems less than thrilled, Mike will offer a pep talk. He’ll contend that Sonny’s gaining a daughter, not losing a son. Of course, Sonny will count on Michael to push Nelle out of the family entirely. He’ll just be patient and trust that Michael can get the job done.