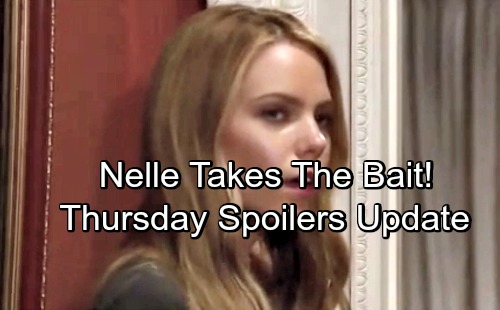 General Hospital (GH) spoilers for Thursday, July 12, tease that Nelle’s (Chloe Lanier) snooping will leave her even more concerned. Thanks to Chase (Josh Swickard) and that prenup curveball, Nelle’s already on edge about the wedding. She’s starting to wonder if Michael really cares about her at all.

Nelle will have additional worries before long. She’ll overhear Michael and Alexis (Nancy Lee Grahn) going over the rest of the legal drama. Michael will suggest that he just wants to get all this out of the way. The sooner, the better! Michael may add that he’s rushing to marry Nelle before the baby comes. He’s been driving home that baby point for months, so it’s easy to see why Nelle would fret.

Chase insisted that Michael could dump Nelle and leave her penniless. He also warned that Michael might make a play for full custody and leave Nelle all alone. After Nelle listens to Michael’s latest remarks, her fears about his devotion will intensify. Michael undoubtedly wanted Nelle to hear this conversation and take the bait.

At GH, Sonny (Maurice Benard) will struggle to hide his displeasure. Mike (Max Gail) will hear about the wedding and urge Sonny to take heart. He’ll think Sonny should focus on welcoming Michael’s blushing bride to the family, but he obviously doesn’t know Nelle’s history! Fortunately, Sonny knows this marriage will be short-lived. He’ll just try to hang in there and have faith in Michael.

While Sonny keeps secrets, Nina (Michelle Stafford) will do the same. She’ll lie in hopes of stopping Valentin’s (James Patrick Stuart) return trip to Wyndemere. He’s been called to handle a crisis at the stables, which would put Liesl (Kathleen Gati) in a tight spot. She’s currently babysitting her hostage there, but Nina will tell a tall tale and leave Peter’s (Wes Ramsey) name out of it.

Valentin will feel like he has to be missing something. He knows Nina better than just about anyone, so he’ll sense that she’s being dishonest. Will Nina pretend she’s suddenly interested in getting back together? Will she find some other suspicious excuse instead? Either way, General Hospital spoilers say Valentin will demand some real answers.

Over with Liesl, she’ll bicker with a smirking Peter. He’ll basically say “I told you so” while Liesl works herself into a frenzy. She certainly doesn’t want to go down for this kidnapping fiasco. At the Metro Court, Curtis (Donnell Turner) and Sam (Kelly Monaco) will be in agreement. They’ll rehash the Peter case and determine that Nina may know more than she’s letting on.

Finally, Jordan (Vinessa Antoine) will corner Stella (Vernee Watson) and request a bit of assistance. She’ll hope Curtis’ auntie will be willing to do her a favor. Stella may give Jordan a hard time about it, but she’ll probably get on board in the end.

It sounds like General Hospital has another great episode in store. We’ll give you updates as other GH news comes in. Stick with the ABC soap and don’t forget to check CDL often for the latest General Hospital spoilers, updates and news.