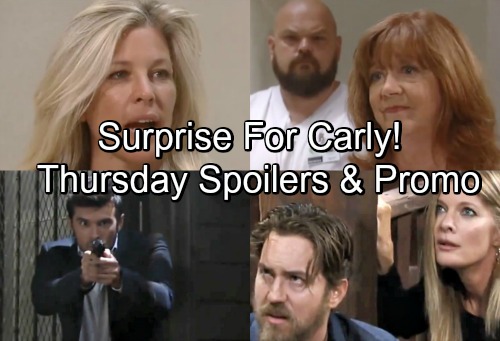 General Hospital (GH) spoilers for Thursday, July 19, tease that Valentin (James Patrick Stuart) will get caught in a misunderstanding. He just stumbled across an unconscious Franco (Roger Howarth), but he’s not the one who struck the blow. Of course, Chase (Josh Swickard) won’t know that! He’ll hold his weapon on Valentin and order him to put his hands up.

Valentin will assure Chase that he had nothing to do with this. However, he’ll be arrested and taken to the police station anyway. General Hospital spoilers say Valentin will suffer through an interrogation, but Franco will ultimately wake up and explain. Once Valentin’s a free man again, he’ll hope he can get to Nina (Michelle Stafford) before she lands in real trouble.

At the Wyndemere stables, Nina will scramble to stop Liesl (Kathleen Gati). She’ll frantically try to save Peter’s (Wes Ramsey) life, but Dr. O will believe death is necessary. GH spoilers say Liesl will start a roaring fire, so that’ll certainly bring some scary moments. Nina won’t be able to get Peter out of there, but a rescue team will assemble and head over there soon.

Other General Hospital spoilers say Liz (Rebecca Herbst) will worry about Franco. He isn’t returning her calls and never showed up at the PCPD, so Liz won’t understand what’s up with him. She’ll share her concerns with Griffin (Matt Cohen), but Franco should be able to clear things up eventually. He’s got a bump on the noggin, but a quick examination should prove he’s fine.

Over with Sam (Kelly Monaco), she’ll try to score additional info. Sam will wonder when Maxie (Kirsten Storms) last saw Liesl, so that should tip Maxie off to the drama. Once Maxie asks a few questions, Sam may admit her suspicions. She feels confident that Dr. O kidnapped Peter, so Maxie will want to help if she can.

At Ferncliff, Carly (Laura Wright) will have a little chat with Mary Pat (Patricia Bethune) and Rupert (Robert Cox). She’ll snarl that she knows her rights, so she’s refusing treatment. Unfortunately, Carly’s escape could change the game. Mary Pat will do everything in her power to keep Carly doped up and under control. She’ll insist that Carly has to play by her rules, so more tension’s ahead.

Finally, Mike (Max Gail) will have a tough episode. He’ll seem frantic as he begs Sonny (Maurice Benard) to help him. Mike’s mind may go back in time during this conversation. If so, Sonny might get some clues about the body and gun. He only knows the evidence is under the foundation of Charlie’s Pub, so an exact location would be useful.

It looks like some gripping scenes are coming up. We’ll give you updates as other GH news emerges. Stay tuned to the ABC soap and don’t forget to check CDL often for the latest General Hospital spoilers, updates and news.