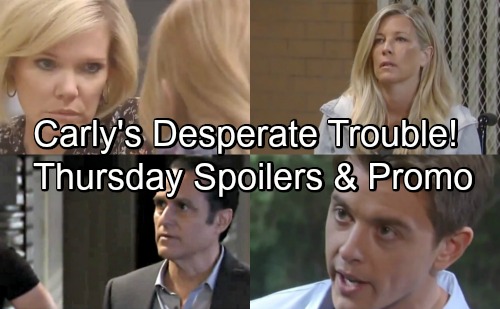 General Hospital (GH) spoilers for Thursday, July 26, tease that Sonny (Maurice Benard) will remain on edge over the risky plot. Chase (Josh Swickard) recorded Nelle asking him to kill Michael (Chad Duell), but it’s not enough. They need more or else Nelle will wiggle out of the consequences.

Sonny will just want to be sure his son stays safe. He’ll urge Michael not to let the family down and hope for the best. At the police station, Chase will give Jordan (Vinessa Antoine) updates on what’s next. He’ll insist that they can bring Nelle down, but Jordan will express doubt. She’ll wonder if Michael can really coax a confession out of Nelle.

Perhaps they want Nelle to admit she murdered Zack. Anything that backs up Nelle’s deadly intentions could help their case. Later, Michael will reconvene with Chase. General Hospital spoilers say they’ll go over every last detail and put the final phase in motion. It looks like they really intend on faking an accident, but the plan will go horribly wrong.

A real car crash is coming up by the end of the week, so GH fans won’t want to miss that shocker. In the meantime, Ava (Maura West) will offer some congratulatory words to Michael. He obviously won’t appreciate them, but that’s kind of the point. Ava loves to push any Corinthos family member’s buttons.

Even Nelle knows the wedding was for show, so she won’t have any regrets about taking Michael out. During a chat with Ava, Nelle might drop a deadly hint. Ava may not fully understand what Nelle means, but she’ll definitely worry. Of course, Nelle will add to Ava’s fears when she suggests threateningly they’re in this together.

At GH, Liz (Rebecca Herbst) will catch Franco (Roger Howarth) off guard. He’ll wonder what she’s doing there, so Liz will have to offer an explanation. She may want to discuss Liesl Obrecht’s (Kathleen Gati) fate or possibly Kiki’s (Hayley Erin) legal battle.

Other General Hospital spoilers say Carly (Laura Wright) will face more Ferncliff drama. Mary Pat (Patricia Bethune) will insist on taking Carly to another room for her treatment. She’ll reiterate that Carly’s going to feel like a new woman soon, so you can bet Carly will put up a fight. The last thing she wants is some strange doctor messing with her mind.

Later, Sonny will corner Kevin (Jon Lindstrom) and demand some answers. He’ll undoubtedly want to know why the doc abandoned Carly. Kevin’s been busy visiting Laura (Genie Francis), but Sonny probably won’t think that was necessary right now. Carly’s in serious trouble, so she really needs an ally to get her through this.

Fortunately, Jason will be armed and dangerous this Friday’s new GH episode, July 27! He’ll burst in Ferncliff and presumably thwart Dr. Lasaris’ (Casey Biggs) horrible treatment. Thursday should bring the exciting buildup, so stay tuned for all the mayhem. We’ll keep you posted as other GH news comes in. Stick with the ABC soap and don’t forget to check CDL often for the latest General Hospital spoilers, updates and news.