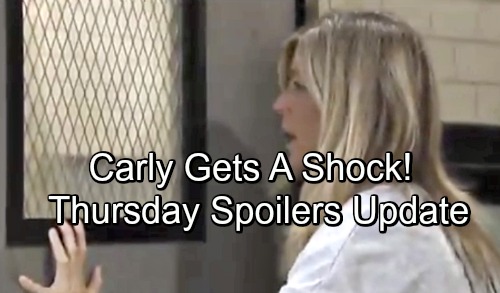 General Hospital (GH) spoilers update for Thursday, June 14, tease that Valentin (James Patrick Stuart) will get an earful for his betrayal. Nina (Michelle Stafford) is prepared to end this marriage, but Valentin’s in denial. He’s clinging to hope for their future together, but Nina will insist he destroyed everything. She’ll rage about the pain Valentin caused and repeat that they’re getting a divorce.

At Wyndemere, Sam (Kelly Monaco) and Curtis (Donnell Turner) will examine the new evidence. It looks like a document that points to Peter (Wes Ramsey) leaving the country. Sam will think Valentin set this in motion, but GH fans know he didn’t help Peter flee the U.S. In fact, Peter’s still quite close to home. He’s stuck with Liesl (Kathleen Gati) in a cabin and Nina’s keeping the secret.

Meanwhile, Kiki (Haley Erin) and Dr. Bensch (James DePaiva) will have a fierce showdown. General Hospital spoilers say Dr. Bensch will feign innocence and try to get under Kiki’s skin. Of course, Kiki will contend that the doc knows what he did and she’s going to make him pay for it.

Nearby, Franco (Roger Howarth) and Liz (Rebecca Herbst) will work through some drama. Liz got a call from Sarah, who found out about the wedding from Franco. Her reaction will leave him puzzled on Thursday’s new GH episode. Franco just won’t get why Liz is so against her family these days. He’ll think she needs to start talking, but Liz may have a hard time sharing her feelings.

In Kevin’s (Jon Lindstrom) office, he’ll have advice for Alexis (Nancy Lee Grahn). She’ll work herself into a tizzy as usual. Alexis tends to fall for the wrong men, so that’s something she’s been mulling over lately. However, she has a new problem now. Looking into her family’s past could bring unwanted pain, but Alexis just can’t help herself.

General Hospital spoilers say Alexis will fret over her problems. She’ll think something’s wrong with her, but Kevin may argue that her curiosity’s natural. He might feel like some history digging is a good thing. If it’s weighing on Alexis’ mind, she’ll never be free until she deals with it.

Finally, Carly (Laura Wright) will feel a sense of comfort. She’ll see Jason (Steve Burton), who’s been locking down a janitor job at Ferncliff. Carly will be excited to have someone in her corner, but doubts could emerge soon. Since Carly’s already taking a bunch of meds, she may wonder if Jason’s even real. This facility’s supposed to help her, but it could drive her over the edge instead!

GH viewers will be anxious to see what else is in store. We’ll give you updates as other news comes in. Stick with the ABC soap and don’t forget to check CDL often for the latest General Hospital spoilers, updates and news.