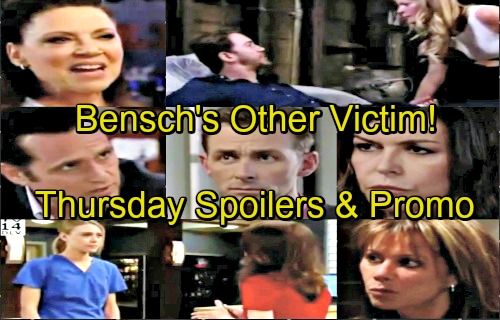 By the time Mike and Sonny were able to resume their conversation, Mike had already forgotten what they were talking about. Nevertheless, Sonny won’t give up. He’ll walk Mike through the story again and hope it rings a few bells.

It doesn’t look like Mike will remember anything else yet, but good news is still headed Sonny’s way. He’ll breathe a sigh of relief over something, so this may be about Jason (Steve Burton). Kevin (Jon Lindstrom) might provide updates on Carly (Laura Wright) and her Ferncliff stint.

Although Kevin has concerns about Jason’s charade, he may admit this arrangement is helping Carly. Just knowing Jason is around gives her comfort. That’s the kind of thing Sonny would love to hear. Meanwhile, Alexis (Nancy Lee Grahn) will convince Julian (William DeVry) to go along with her therapy plan. He suggested that he’d have to think about it, but she’ll feel like he owes her this.

After everything Julian put Alexis through, the least he can do is sit through a therapy session. Once Julian makes sure Kim’s (Tamara Braun) cool with it, this appointment will move forward. At GH, Liz (Rebecca Herbst) will give Kiki (Haley Erin) a pep talk. She’ll maintain that Dr. Bensch (James DePaiva) deserves to go down.

Liz will insist that there are undoubtedly other victims and she’s exactly right. Within the next few GH episodes, another target will confide in Kiki. It turns out Francesca (Celesta DeAstis) was sexually harassed as well, so Kiki may have someone else in her corner.

Other General Hospital spoilers say Finn (Michael Easton) will track down Valentin (James Patrick Stuart). Will he push for Peter’s (Wes Ramsey) location? Valentin doesn’t have a clue where Peter is, but Finn may not buy that. He might urge Valentin to give Anna (Finola Hughes) a chance at closure.

In the cabin, Nina (Michelle Stafford) will blast Peter again. She can’t seem to wrap her head around how she feels. One minute Nina’s somewhat sympathetic and the next she’s pretty much cheering Liesl (Kathleen Gati) on. Peter will fire back after Nina’s latest outburst. He’ll wonder if she really thinks he deserves to die.

At this point, Peter may urge Nina to let Dr. O finish him off. He’s fed up and tired of fighting. Over with Anna, she’ll face more drama. Liesl will snarl that they still have an old score to settle. Will Liesl offer any clues for Anna to pick up on? It’d be great if Anna could free Peter in the end.