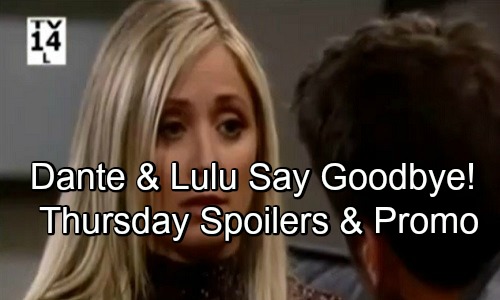 General Hospital (GH) spoilers for Thursday, June 28, tease that Finn (Michael Easton) will have Anna (Finola Hughes) on his mind. He’ll decide to give her a call, but she probably won’t answer. Still, Finn will at least want to leave a sweet voicemail. He’ll tell Anna how much he misses her and hope she gets in touch later.

Unfortunately, it appears Anna’s been kidnapped! It’s doubtful she’ll be able to contact Finn, so it’ll be a while before he learns the truth. In the meantime, Dante (Dominic Zamprogna) will make a shocking career move. He’ll undertake a special mission for the WSB, so he’ll have to break the news to Lulu (Emme Rylan). Dante will admit that he’s leaving tonight, so they’ll share an emotional goodbye.

Other General Hospital spoilers say Alexis (Nancy Lee Grahn) will face off with Dr. Bensch (James DePaiva). At Charlie’s Pub, the despicable doc will remain as smug as ever. Alexis will insist that Dr. Bensch had better get a lawyer. She’ll let him know she’ll be seeing him in court.

Speaking of Ava, she’ll have another chat with Franco (Roger Howarth). Things will be pretty tense this time around. Ava will want Franco to stop waffling and help her. She seems to be inching down a dark hole and she just might drag Franco down with her! Ava will do whatever it takes to make Dr. Bensch pay.

Over with Drew (Billy Miller), he’ll battle some confusion. General Hospital spoilers state that he’ll visit Liz (Rebecca Herbst) at her request, but he’ll feel like it’s some sort of mistake. Liz will assure Drew that she knew what she was doing. Her invitation was deliberate, so she must have something important to divulge.

Elsewhere, Sam (Kelly Monaco) will help Jason (Steve Burton) understand what’s at stake. She’ll warn that if Carly’s (Laura Wright) not going to think, Jason will have to do it for her. Carly tends to make risky choices when she’s up against the wall. Jason needs to help Carly play by Ferncliff’s rules. Meanwhile, he can keep working on a plan to free her behind the scenes.

Of course, Michael’s (Chad Duell) doing the same thing. He just proposed to Nelle (Chloe Lanier) as part of his plot, so she’ll give him an answer on Thursday. It’s tough to imagine Nelle turning Michael down! Now’s not the time to play hard to get, so Nelle will probably accept this offer of marriage.