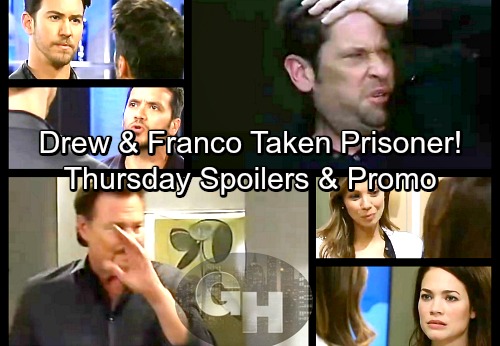 General Hospital (GH) spoilers for Thursday, March 15, tease that Liz (Rebecca Herbst) will mull over the Franco (Roger Howarth) situation. She’s hopelessly in love with the guy, but how can she get past all his deception? Liz pushed Franco away, but she may wonder if that was the right call. She’ll eventually open up to Kim (Tamara Braun) and get some advice on how to proceed.

Kim won’t want to overstep here, but she can tell that Liz and Franco truly care about each other. She may not think Liz should throw that away. Kim will point out that everybody has secrets. She might urge Liz to give this a little more thought before she gives up on Franco for good. 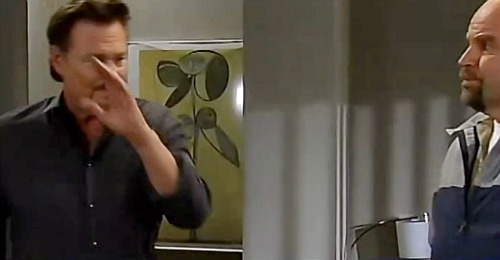 Elsewhere, Franco and Drew (Billy Miller) will be in a tight spot. After Franco got in over his head with Jim Harvey (Greg Evigan), Drew decided to intervene. Unfortunately, Jim called in some huge brutes and now they’re facing extreme danger.

GH spoilers say Jim will give Franco and Drew a stern warning. He’ll insist that they should just leave the past where it belongs. It looks like at least one of them may push back. That’ll lead to a shocker in Thursday’s new GH episode, March 16.

Drew and Franco will be tossed in captivity together, so this obviously isn’t how they hoped things would turn out. While they struggle to find a way out, Sam (Kelly Monaco) will grow concerned about her husband. She’ll battle intense fears and seek some guidance.

When Alexis (Nancy Lee Grahn) visits her at Aurora Media, Sam will note that she hasn’t heard from Drew since yesterday. He was quite cryptic during their last chat, so she’ll definitely be worried. Sam might share her love confession news as well. She trusts her mom, so maybe she’ll fill Alexis in on what she said to Jason (Steve Burton) and how torn she’s become.

Across town, Dante (Dominic Zamprogna) will rip into Peter (Wes Ramsey). He’ll blame the COO for all the Faison (Anders Hove) coverage. Peter could’ve put a stop to Lulu’s (Emme Rylan) interview with Nathan (Ryan Paevey), but he moved forward knowing the fallout would be brutal. Dante will bark that Peter didn’t care who he put in harm’s way.

Over with Lulu and Maxie (Kirsten Storms), there’ll be another round of drama. General Hospital spoilers say Maxie will once again blast Lulu over the interview. She feels like Lulu played a big part in getting Nathan killed, so she’ll remind her former friend of that on Thursday.

Lulu will be sorry that Nathan’s gone, but she won’t think she should get all the blame for this. It’s not like she pulled the trigger. Maxie will gripe about how nothing is ever Lulu’s fault. She’ll get a restraining order against Lulu in the near future, so stay tuned for more chaos.

At the police station, Ned (Wally Kurth) will consider how he’s going to handle Jim. The mayor’s on Curtis and Jordan’s (Vinessa Antoine) side now, but taking a stand against Jim could be tricky. We’ll give you updates as other General Hospital details emerge. Stick with ABC’s GH and don’t forget to check CDL often for the latest General Hospital spoilers, updates and news.