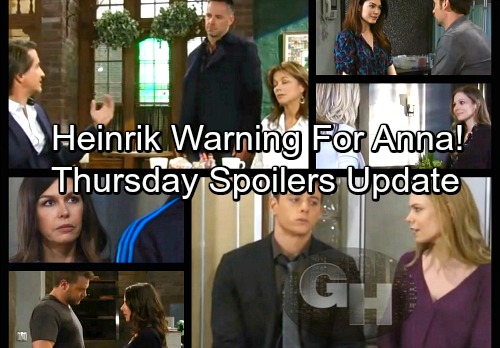 General Hospital (GH) spoilers for Thursday, March 22, tease that Andre (Anthony Montgomery) will ask Anna (Finola Hughes) about her search for Heinrik. He’ll wonder if she’s any closer to finding him, but GH fans know she isn’t. Anna just doesn’t have enough clues to point her in Peter’s (Wes Ramsey) direction yet.

Andre will warn Anna to give it a rest. He knows she’s desperate to find Heinrik and warn him about the Huntington’s diagnosis, but she can’t let this mission take over her life. While Anna gets guidance, Carly (Laura Wright) will reach out to Kim (Tamara Braun). She’ll want to discuss Josslyn (Eden McCoy) and Oscar (Garren Stitt) in Thursday’s GH episode.

Carly will be taken aback by something, so perhaps Kim will back her up. They might be able to avoid any disagreements involving their parenting styles. Oscar and Josslyn’s relationship is moving right along, which means the potential for pain is on the rise. Kim and Carly may just want to make sure they’re prepared for the inevitable teen drama.

Other General Hospital spoilers say Nelle (Chloe Lanier) and Michael (Chad Duell) will clash. As usual, Carly will be at the center of their conflict. Nelle will insist that Carly’s out to her, but Michael just won’t think so. He’ll point out that Carly has plenty of reasons to hate Nelle, but she’s keeping her hatred in check for the baby’s sake.

Nevertheless, Nelle will plant significant seeds in hopes of making Carly look unhinged later. Elsewhere, Julian (William deVry) and Finn (Michael Easton) will once again spar. There won’t be any punches thrown this time, but Finn will still voice his complaints. He’ll think his friendship with Alexis (Nancy Lee Grahn) is obviously a problem for Julian.

Alexis will side with Finn on this and urge Julian to cool it. She won’t see why he should object to the pals she chooses. Across town, Drew (Billy Miller) and Sam (Kelly Monaco) will savor some warm moments. Now that Drew’s safe, Sam can finally breathe a sigh of relief. She’ll also want more info on the whole Jim Harvey (Greg Evigan) situation.

Drew will explain anything he might’ve left out at the police station. He’ll probably surprise Sam by suggesting that being trapped with Franco (Roger Howarth) wasn’t so bad. Speaking of Franco, he’ll spill his guts on Thursday. He’ll lay all his cards on the table with Liz (Rebecca Herbst) and hope that they can still have a future together.

Betsy (Deborah Strang) will come clean at some point, so that’ll ease Franco’s mind as well as Liz’s. This couple should get back on track eventually, but Franco needs to remember honesty is the best policy! We’ll give you updates as other General Hospital news comes in. Stick with ABC’s GH and don’t forget to check CDL often for the latest General Hospital spoilers, updates and news.