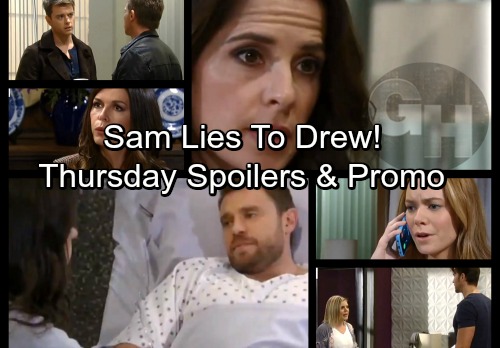 General Hospital (GH) spoilers for Thursday, March 8, tease that Anna (Finola Hughes) will have an intriguing encounter. Someone will approach her in a restaurant and ask if she’s Anna Devane. Anna will look surprised and wonder what this is all about.

It seems Anna will get some crucial news about her long-lost child. She’ll get one step closer to finding what she believes is her daughter, but Valentin (James Patrick Stuart) has deceived her as expected. Anna actually gave birth to a boy and she’ll discover that sooner or later. GH fans can expect Anna to unleash her wrath on Valentin next week.

In the meantime, Peter (Wes Ramsey) will be there for Maxie (Kirsten Storms). She’ll be upset about her baby potentially having Huntington’s disease. It appears Maxie will rant about Faison (Anders Hove) and the illness he was battling. She’ll think he deserved it, but her innocent little one certainly doesn’t.

Of course, Peter will keep a big secret throughout all of this. He’ll be nervous as well since he could have Huntington’s disease. General Hospital spoilers say Peter’s possible diagnosis could lead to his downfall, so stay tuned for all the drama.

Elsewhere, Nelle (Chloe Lanier) will get some shocking updates. She’ll receive a phone call and express disappointment over what she hears. Later, Monica (Leslie Charleson) will meet up with Nelle to see how she’s doing. She’ll be concerned about how the earthquake might’ve affected the baby.

Nelle will suggest that the kid’s fine, but perhaps the same can’t be said for her apartment building. It might’ve been damaged or destroyed. Fortunately, this will work to Nelle’s advantage in the end. General Hospital spoilers say Monica will invite Nelle to live at the Quartermaine mansion soon, so things are working out beautifully.

At GH, Jason (Steve Burton) will have some solid advice for Michael (Chad Duell). He’ll point out that Carly (Laura Wright) has good instincts and suggest that Michael should trust them. Jason won’t tell Michael how to live his life like Carly does, but he’ll think there’s a reason to be wary of Nelle.

In Drew’s (Billy Miller) hospital room, Sam (Kelly Monaco) will let him know she was worried sick. Drew will just be glad Sam made it out of the earthquake unscathed. He’ll be upset about her flying solo during the mayhem, but she’ll admit she wasn’t alone. Sam will mention the danger she faced with Jason, but she’ll probably leave out the whole love confession part!

Over with Carly and Sonny (Maurice Benard), they’ll discuss what to do about Mike (Max Gail). They can’t just ignore the fact that he has Alzheimer’s. It’s time to tackle this head-on, so Carly will push Sonny to take action. They need to look into some extra care for Mike and find a way to deal with this.

It sounds like some great scenes are ahead. We’ll keep you posted as other GH details emerge. Stick with the ABC soap and don’t forget to check CDL often for the latest General Hospital spoilers, updates and news.