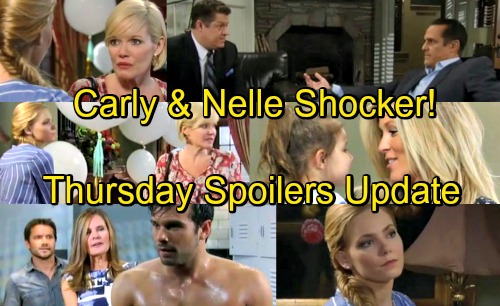 General Hospital (GH) spoilers update for Thursday, May 10, tease that Sonny (Maurice Benard) will deal with another crisis. It looks like Max (Derk Cheetwood) will fill Sonny in on some new Croton details. If somebody’s planning to build something in the area, that could certainly spell bad news for Sonny. He could dig up the corpse he buried along with the incriminating weapon, but could spark trouble, too.

Sonny doesn’t want this evidence uncovered, but he doesn’t want to draw unnecessary attention either. He’ll feel like he just can’t win here. Max will undoubtedly be willing to pitch in with whatever the boss needs. However, Sonny may wait a bit longer before he makes a bold move. Jason (Steve Burton) will help Sonny out with his problem next week, so stay tuned for all the excitement.

In the meantime, Nelle (Chloe Lanier) will look forward to Carly’s (Laura Wright) destruction. At the baby shower, Carly will spend some time holding Avery (Ava and Grace Scarola). She’ll put on a fake smile as she tries to get through this party. Carly will be determined to grin and bear it, but Nelle will hope to bring tears and an outburst later.

Before Nelle launches the next phase of her plot, Ava (Maura West) will express confusion. She’ll catch Nelle away from the crowd and suggest her sabotage scheme is a failure. Ava will argue that Nelle’s not doing a very good job of targeting her enemy.

This bash will just seem like your run-of-the-mill baby shower, but Nelle will offer an explanation. She’ll promise that things will spiral out of control soon enough. They just have to get to the gift-opening portion of the gathering. Between the blanket she made and the present Ava’s bringing for her, Nelle will think she’s got all the ammo she needs.

General Hospital spoilers say Carly will face more Morgan (Bryan Craig) drama, so she’s sure to lose it right in the middle of the get-together. Unfortunately, the aftermath will bring grave danger for Nelle. It appears GH fans will see a staircase fall by the end of the week.

Elsewhere, Finn (Michael Easton) will make his pitch to Alexis (Nancy Lee Grahn). He’ll think he has a way to preserve their friendship. In light of the recent Chase (Josh Swickard) trick, Finn will push for a pact. He might contend that it’s best to leave their families out of this and just focus on what’s between the two of them.

Alexis will probably suggest they’ve got a deal. She hates that she sorry that she overstepped, so maybe they can get back on track soon. Over with Lucy (Lynn Herring), she’ll continue her Nurses Ball mission. Lucy has been securing several donations, but she’s always in need of more performers.

It sounds like Dante (Dominic Zamprogna) may be off the hook thanks to Chase. Lucy will spot the hunky detective shirtless and drenched from his shower. She’ll hire him on the spot, which means Chase will have to prepare something special for the big event. Word has it Chase will belt out a tune, so GH viewers will definitely want to check that out.