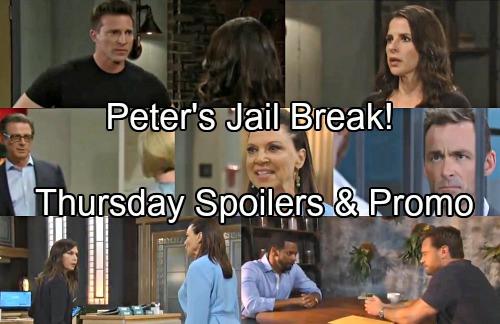 General Hospital (GH) spoilers for Thursday, May 31, tease that Anna’s (Finola Hughes) in for a shock. Liesl (Kathleen Gati) will confront her at GH and make a bold declaration. She’ll insist it’s Anna’s fault that Nathan (Ryan Paevey) is dead. Dr. O will blame Anna for conceiving a child with Faison (Anders Hove) and not caring if the kid grew up to run amok.

That’s not how it went down, but Anna’s excuses won’t stop Liesl’s wrath. Of course, Peter (Wes Ramsey) should face backlash soon as well. Liesl will want to unleash her fury on all parties involved. Elsewhere, Sam (Kelly Monaco) will surprise Jason (Steve Burton) with a request. She’ll want him to help get Peter out of custody for Drew’s (Billy Miller) sake.

Sam will be determined to acquire the flash drive and give Drew a better chance at success. Wiping Jason’s memories without replacing them is awfully risky. If Sam can do something to prevent brain damage, she’ll certainly want to try. Since this is Sam we’re talking about, Jason will naturally do everything in his power to make her happy.

Over with Andre (Anthony Montgomery), he’ll wonder if Drew’s having second thoughts about the procedure. However, Drew seems committed to his goal. It looks like he’ll move forward with his memory recovery plans, but some surprising hurdles will hit before long.

Other General Hospital spoilers say Peter will blast Valentin (James Patrick Stuart) for handing him over to Faison as a baby. He’ll be just as furious that Valentin kept quiet about his mother’s identity. Peter will snarl that it’s a good thing there are bars between them. If there weren’t, Peter would have no problem punching Valentin’s lights out.

Meanwhile, Kiki (Haley Erin) will take Liz’s (Rebecca Herbst) advice and report Dr. Bensch (James DePaiva). She’ll file a complaint with the board, but this process will be difficult. Dr. Bensch is one slippery character, so he’ll most likely spring some ammunition on Kiki when she least expects it. Her hookup with Griffin (Matt Cohen) could easily come back to haunt her.

Across town, Dr. Bensch will tell Ava (Maura West) he was hoping to pick up something beautiful. He may purchase a gift, but Ava will undoubtedly have a bad feeling about this guy. Nevertheless, Dr. Bensch will remain confident about a hot night with Kiki. He’ll believe she’ll come to her senses and end up back at his hotel room, but he’s obviously wrong about that.

Instead, Dr. Bensch has some serious accusations headed his way. He’ll definitely fight back, so General Hospital fans won’t want to miss all the bombshells. We’ll give you updates as other GH news comes in. Stay tuned to the ABC soap and don’t forget to check CDL often for the latest General Hospital spoilers, updates and news.