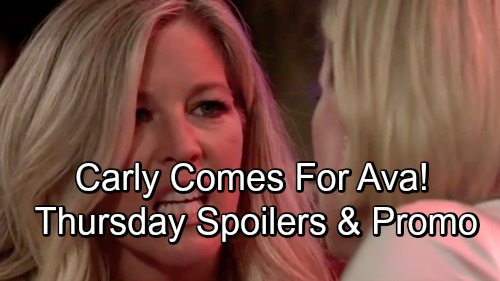 General Hospital (GH) spoilers for Thursday, November 1, tease that Josslyn (Eden McCoy) will face some disappointment. She’ll wish she could be spending Halloween with Oscar (Garren Stitt), but Cameron (William Lipton) will be there to ease her pain. They’ll be dressed up as Princess Leia and Hans Solo from Star Wars, so at least they can enjoy some fun costumes.

Later, Cameron will discover something shocking. Since he’ll be down by the docks, he might stumble across the murder weapon or perhaps some blood. There’s a good chance Ryan (Jon Lindstrom) killed Mary Pat (Patricia Bethune), so there may be some traces left behind.

Ryan’s smart enough to be sure nothing can trace back to him, but there might be a spooky hint waiting for Cam to uncover. As for Mary Pat’s body, word has it that may turn up in a more surprising way. In the meantime, Drew (Billy Miller) will plead with his son. He’ll corner Oscar and insist that he’s not going to let him go – especially since they only just found each other.

Oscar won’t be moved by the statement. He’ll remain bitter about being controlled, so he should tell Drew to back off. Oscar will still plan to seek emancipation and take charge of his own fate. Of course, that’s exactly what Kim’s (Tamara Braun) afraid of. Julian (William DeVry) may suggest letting Oscar cool down a bit more, but Kim won’t be on board with that.

Kim will declare that if she does nothing, her child’s going to die. She’ll refuse to stand by and let Oscar just give up on his future. Over with Nina (Michelle Stafford) and Valentin (James Patrick Stuart), their close moment will turn into one of passionate pain. Valentin will assure Nina that he loves her and won’t screw up again, but she won’t know how she’s supposed to believe him.

While Valentin and Nina get a grip on their emotions, Laura (Genie Francis) will offer Alexis (Nancy Lee Grahn) a warning. She’ll argue that any gift from a Cassadine comes with a hidden cost, so Alexis’ watch will probably spark this conversation. Nearby, Carly (Laura Wright) and Ava (Maura West) will have a vicious showdown. They’ll hurl threats and accusations, so expect some heated moments.

Other General Hospital spoilers say Mac (John J. York) will join the fundraiser party. As he jokes with Ryan (Jon Lindstrom), Mac will suggest maybe it’s finally time they “kill off those two broads.” He may be teasing “Kevin” about their wives, but he’d better not give Ryan any ideas!

Finally, Michael (Chad Duell) will meet up with Chase (Josh Swickard). GH fans know they both went through a lot thanks to Nelle (Chloe Lanier). General Hospital spoilers say they’ll bond over that on Thursday’s new GH episode, November 1, so it sounds like a solid friendship is forming. That’s great since Michael’s struggling and could use a pal who understands.

The sinister shockers and shakeups will continue in this action-packed episode, so stay tuned. We’ll give you updates as other GH news comes in. Stick with the ABC soap and don’t forget to check CDL often for the latest General Hospital spoilers, updates and news.