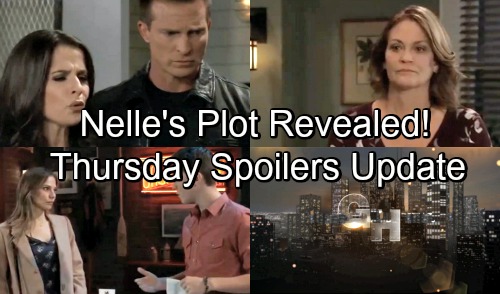 General Hospital (GH) spoilers update for Thursday, November 8, tease that Franco (Roger Howarth) and Liz (Rebecca Herbst) will welcome a visitor. Jordan (Briana Nicole Henry) will arrive with some questions, so Franco will assume this is about his past. He’ll feel like his background as a killer will come into play.

There’s another murderer running around Port Charles, so the PCPD could use some help. It’ll be painful for Franco, but maybe he can reflect on his old mentality. Franco’s tumor was the real problem, but he could still tap into his frame of mind back then.

Across town, Cameron (William Lipton) will be confused by Josslyn’s (Eden McCoy) behavior. She’ll be in a hurry to get away from Carly (Laura Wright), so Cam will wonder why. Perhaps Joss will just want to skip an interrogation. She’s fake dating Cameron in hopes of winning Oscar (Garren Stitt) back, but she doesn’t want Carly in the loop.

Cameron should understand Josslyn’s desire to avoid her mom. He’ll certainly try to avoid his own mother on Thursday. Of course, Liz will prove relentless as usual. She’ll suspect Cameron has a hidden agenda, so she’ll push him for some answers.

Cam claims Joss is just a pal, but Liz may think he’s getting closer for a romance. She’ll try to prevent that for Oscar’s sake. The poor kid doesn’t need any more pain in his life! In the meantime, Oscar will once again be at odds with Kim (Tamara Braun). She’ll urge Oscar to reconsider his emancipation lawsuit, but the sick teen will insist that it’s happening.

Other General Hospital spoilers say Sonny (Maurice Benard) will reach out to Jeanette (Ely Pouget). He’ll show up on her doorstep and worm his way inside, so Jeanette will be in a tight spot. Sonny will want her to admit that she essentially ordered the hit on Vincent.

Margaux (Elizabeth Hendrickson) will listen intently thanks to Sonny’s wire. She’ll hope Sonny’s wrong, but she’ll have a feeling he’s right. At Ferncliff, Curtis (Donnell Turner) will get caught texting. A staff member will grow curious about what this phony security specialist is up to!

In another part of the building, Jason (Steve Burton) and Sam (Kelly Monaco) will face confusion. They just found a patient, but it’s obviously not Kevin (Jon Lindstrom). There’s a good chance it’ll be Nelle (Chloe Lanier) since she’s back on Thursday.

GH spoilers say Nelle’s been using her typical trickery, so she may have finagled a transfer from Pentonville. Security is rather lax at Ferncliff, so Nelle might’ve thought this was her ticket to freedom. It was at least worth a shot!

Carly made a quick getaway during her time there, which could inspired Nelle to go for it. Since she’s still locked up, the plan apparently hasn’t paid off yet. General Hospital spoilers say some fun Nelle scenes are brewing, so stay tuned. We’ll give you updates as other news comes in. Stick with ABC’s GH and don’t forget to check CDL often for the latest General Hospital spoilers, updates and news.