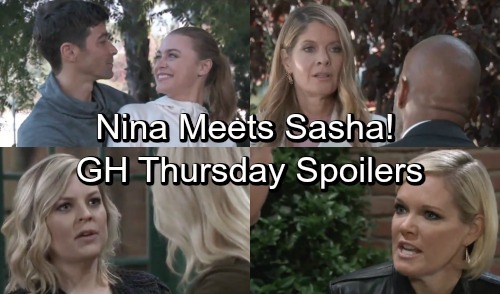 General Hospital (GH) spoilers for Thursday, October 11, tease that Nina (Michelle Stafford) will battle anxiety. She’ll be ready to see Sasha (Sofia Mattsson) for the first time, but she’ll definitely worry about how this will go. Curtis (Donnell Turner) will ask Nina what she hopes to get out of this meeting. He may warn Nina to keep her expectations low since Sasha’s still processing everything.

Nina may admit that she’d like to bond with her daughter, but she doesn’t expect it to happen overnight. Just some pleasant introductions would suit her just fine. Unfortunately, that’s not what’s ahead in this storyline. General Hospital spoilers say Nina and Sasha’s first meeting will be a total disaster. Sasha will end up rejecting her birth mother, so Nina’s going to be a mess soon.

Meanwhile, Ava (Maura West) will have a chat with Scott (Kin Shriner). He’ll understand that Ava’s been going through a lot, but it looks like he’ll defend Kiki (Hayley Erin), too. Scott may urge Ava to apologize and make amends if possible. GH fans can expect a fierce reaction from Ava. She’ll fire back that she’s the injured party here. At this point, Ava won’t see any reason why she should play nice.

Over with Griffin (Matt Cohen), he’ll share some close moments with Kiki. Griffin will suggest that he’s never done what he did last night. That sounds naughty, but he’ll probably just be talking about the film festival Kiki talked him into attending. Griffin’s far from a movie buff, so Kiki’s doing her best to change that. Of course, it doesn’t really matter what these two do as long as they’re connecting.

Other General Hospital spoilers say Maxie (Kristen Storms) and Felicia (Kristina Wagner) will disagree. It appears Peter (Wes Ramsey) will be a source of contention on Thursday. Maxie will glare at her mom and insist that he’s her friend. Felicia will wonder if Maxie’s sure about that, so they’ll have some issues to sort out.

Across town, Lulu (Emme Rylan) will seem rather upset. She may get some disappointing updates from Dante (Dominic Zamprogna), whose mission won’t be wrapping up anytime soon. As someone enters the room, Lulu will hope he or she didn’t hear her last conversation. Since it seems they’ll be at the The Invader office, there’s a good chance Peter will be the inadvertent eavesdropper.

However, GH may push Chase (Josh Swickard) and Lulu together soon. If they can cook up an excuse for Chase to be there, that’s another option to consider. At the Metro Court, Drew (Billy Miller) will blast Margaux (Elizabeth Hendrickson) over the flash drive. He’ll wonder what kind of game the manipulative DA’s playing.

Drew will ask Margaux why she’s messing with his life, but she’ll argue that it isn’t personal – at least not on Drew’s end. The only thing personal about this is Margaux’s vendetta against Sonny (Maurice Benard). Elsewhere, Laura (Genie Francis) will want honesty from “Kevin” aka Ryan (Jon Lindstrom). He can’t hide behind that bogus cold excuse forever.

Laura will contend that “Kevin” isn’t really under the weather. She’ll think he’s just trying to avoid her, so she’ll hope to learn why and fix their relationship. General Hospital spoilers say Ryan will have a tricky situation on his hands! We’ll keep you posted as other GH news comes in. Stay tuned to the ABC soap and don’t forget to check CDL often for the latest General Hospital spoilers, updates and news.