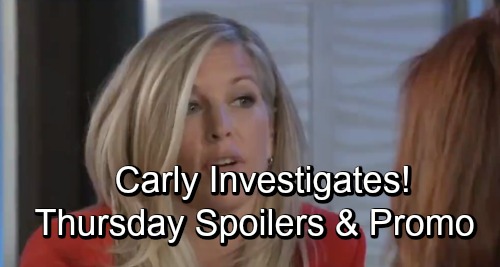 General Hospital (GH) spoilers for Thursday, October 18, tease that Olivia (Lisa LoCicero) will have some bad news to pass along. She’ll hate to break this to Curtis (Donnell Turner) and Jordan (Briana Nicole Henry), but she’ll simply have no choice. It sounds like their wedding plans will be derailed a bit. Perhaps some arrangements they previously made will suddenly fall through.

Jordan and Curtis will have to make a tricky decision thanks to Olivia’s updates. They’ll do their best to deal with the drama and stick together. In the meantime, Julian (William deVry) will grill Alexis (Nancy Lee Grahn) about Oscar (Garren Stitt). He’ll want to know about the teen’s quest for legal advice. Julian will wonder if Oscar shared why he was so interested in challenging parents’ authority.

Oscar fibbed that it was for a school assignment, but Alexis could see through his deception. She may tell Julian that Oscar’s mission seemed personal. While they debate the situation, Kim (Tamara Braun) will push Oscar to undergo the clinical trial. She’ll admit that she’s spent years looking for a solution and this could be it. Kim just won’t want Oscar to throw away his last shot at survival.

Oscar will still look enraged, so he may not back down just yet. Kim will end up turning to Bobbie (Jacklyn Zeman) for comfort later. At least Kim’s getting support when she needs it most! Over with Liz (Rebecca Herbst) and Franco (Roger Howarth), they’ll attend a parent-teacher conference. Aiden’s (Jason David) teacher summoned them for one, so they’ll have questions about the boy’s behavior.

This teacher will seem troubled, which should freak Liz out even more. She’ll be anxious to get to the bottom of Aiden’s issues in school. At home, Josslyn (Eden McCoy) will make her pitch to Cameron (William Lipton). Spencer’s (Nicholas Bechtel) guidance gave her a big idea. Josslyn’s hoping Cam will pretend to be her boyfriend and spark some jealousy for Oscar.

Cameron won’t know if this is the best plan, especially since he has real feelings for Joss. Nevertheless, GH spoilers state that Josslyn will make a convincing argument. Cameron won’t be able to resist helping Josslyn out. He may even hope it’ll turn into something more meaningful.

At the Metro Court, General Hospital spoilers say Carly (Laura Wright) will battle suspicions. She’ll tell Bobbie that she’s tempted to go “over there” and figure out what’s going on. Will Carly be talking about somebody talking nearby? If so, this could have something to do with Ryan (Jon Lindstrom). Carly’s starting to pick up on how weird he’s acting.

Of course, “over there” could also mean Pentonville. Carly might consider paying Nelle (Chloe Lanier) a visit before talking herself out of it. She can tell something’s up with her enemy, but she probably just wants to put Nelle behind her.