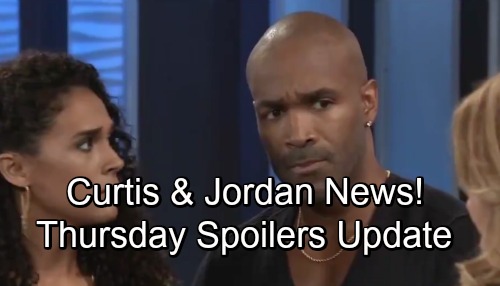 General Hospital (GH) spoilers update for Thursday, October 18, tease that Kim (Tamara Braun) will plead with her son. Oscar’s (Garren Stitt) putting up a fight on the clinical trial that could save his life, so Kim will try to get through to him. She’ll explain that she’s been researching treatments for two years, but nothing’s panned out…until now. This could be a real solution, so Kim will push Oscar to cave in.

Sadly, Oscar’s still having a hard time with all this. He doesn’t seem to think the clinical trial will work, so he’ll most likely stand his ground. Across town, Alexis (Nancy Lee Grahn) and Julian (William deVry) will discuss another Oscar angle. He’ll hope she can offer some insight into a puzzling situation.

Oscar recently sat down with Alexis and asked questions about challenging his parents’ authority. He wondered what would happen if a mom and dad weren’t acting in their child’s best interest. Alexis suspected this was about more than a simple school project. She may reveal that to Julian when he asks. General Hospital spoilers say Julian will just want to get to the bottom of this and help if he can.

Meanwhile, Cameron (William Lipton) will try to figure out kind of game Josslyn’s (Eden McCoy) playing. He knows she’s desperate to reunite with Oscar, but she just called with a startling request. Joss needs Cam to be her boyfriend, but she’s not talking about her real one. She’ll want a fake relationship to stir up some envy in Oscar and reboot the romance she actually wants.

Of course, lines could be blurred if this goes on too long. Cameron obviously wants to be with Josslyn, so this could be a recipe for disaster. Back with Kim, she’ll bond with Bobbie (Jacklyn Zeman). GH spoilers say Kim will get the support she needs, so she’ll have the strength to get through another difficult day.

Thursday won’t be easy for Liz (Rebecca Herbst) and Franco (Roger Howarth) either. They’ll have to attend Aiden’s (Jason David) parent-teacher meeting, so they’ll be nervous about the revelations ahead. Aiden’s instructor will look worried as Liz asks about the problem. At least Liz will have Franco there to ease the tension and back her up!

Other General Hospital spoilers state that Carly (Laura Wright) will be apprehensive. She’ll have a mystery on her mind, so she’ll tell Bobbie all about it. It looks like Carly may see some Metro Court patrons that leave her suspicious. Ryan (Jon Lindstrom) and Ava (Maura West) might end up chatting there again.

However, Nelle also got Carly’s attention at the courthouse. Now that Nelle’s officially serving her stint in Pentonville, will Carly contemplate another faceoff? She may be tempted, but a visit won’t happen anytime soon. Chloe Lanier’s two-episode stint has already wrapped up.

Finally, Curtis (Donnell Turner) and Jordan (Briana Nicole Henry) will get a shock. General Hospital spoilers say Olivia (Lisa LoCicero) will fill them in on some unfortunate news. They may have to make some wedding changes due to unforeseen circumstances.

Can Jordan and Curtis save their big day? We’ll give you updates as other GH details emerge. Stay tuned to the ABC soap and don’t forget to check CDL often for the latest General Hospital spoilers, updates and news.