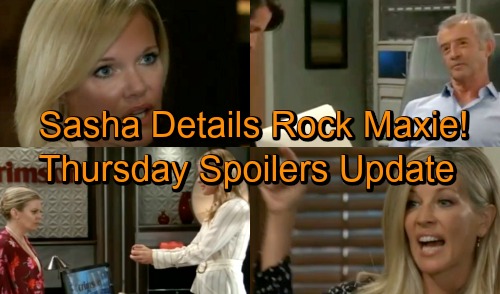 General Hospital (GH) spoilers for Thursday, October 4, tease that Gregory (James Read) will head to an important appointment. He’ll show up for an examination at GH, so Finn (Michael Easton) will do his best to resolve his issues. Of course, pinpointing what’s wrong and finding a cure won’t be easy.

That’s exactly why Gregory turned to Finn for help. He knows his son’s a great doctor, so he’ll trust Finn to fix him right up. According to Gregory, failure is the only thing Finn hates more than his old man. Chase (Josh Swickard) won’t like his dad’s joke, but he’ll just try to bring everyone together. On a serious note, Finn’s a real pro at his job. Despite his problems with Gregory, he’ll give the case his all.

At Crimson, Maxie (Kirsten Storms) will react to Nina’s (Michelle Stafford) daughter drama. She thought Nina was crazy when she came up with the long-lost child story. Maxie suggested that half a heart pendant was pretty flimsy proof. However, Nina will have hard evidence this time. She’ll fill Maxie in on Valentin’s (James Patrick Stuart) mission and the two DNA test matches.

Maxie will continue to battle doubts, but Nina will believe Curtis’ (Donnell Turner) claims. She doesn’t trust Valentin, but she trusts her close pal. Nina will let Maxie see the pic that Valentin handed over and share that her daughter’s name is Sasha. By the end of this conversation, Maxie’s head should be swimming with shockers!

Elsewhere, Peter (Wes Ramsey) and Griffin (Matt Cohen) will discuss their pain. Neither one of them’s doing very well these days, but Griffin will hope Peter’s managed to find peace. Sadly, Peter will admit he’s still searching. It seems only repairing the damage with Maxie can bring him that. On the bright side, their bond is slowly mending. Maxie and Peter are inching toward a much better place.

Meanwhile, Danny (T.K. Weaver) will meet up with Jason (Steve Burton) for some quality time together. Danny has fully embraced Jason as his dad, so that brings them both joy. It certainly warms Sam’s (Kelly Monaco) heart, too. She’ll take a minute to appreciate their connection in Thursday’s episode.

Other General Hospital spoilers say Ryan (Jon Lindstrom) will grow closer to his prey. He’ll chat with Felicia (Kristina Wagner), but she’ll naturally assume he’s Kevin (Jon Lindstrom). Felicia will talk about the Ryan Chamberlain anniversary edition. Instead of concentrating on the agony this brings, she’ll view it as a chance to share the gruesome truth.

Ryan will just stand there looking creepy as usual! He’ll most likely back Felicia up and insist that all the gory details must be revealed. Ryan would love for the whole town to start buzzing about his terrible crimes. He’s hoping to add a few more to the list soon enough.

Later, General Hospital spoilers say Ava (Maura West) will rub Carly (Laura Wright) the wrong way. They’ll go to war over something at Sonny and Carly’s place, so expect some explosive moments. Ava will feel like the score’s been settled, but Carly won’t have the same perspective. She’ll end up kicking Ava out of the house, but that won’t do much good. This definitely won’t be the last time they clash!

GH fans will want to check out the chaos happening on Thursday. We’ll give you updates as other news comes in. Stay tuned to the ABC soap and don’t forget to check CDL often for the latest General Hospital spoilers, updates and news.