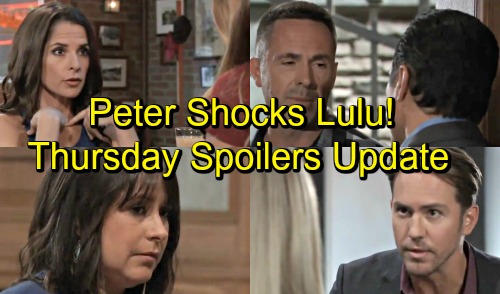 General Hospital (GH) spoilers for Thursday update, September 13, tease that Margaux (Elizabeth Hendrickson) will seek answers. Human remains were found thanks to the explosion at Charlie’s Pub. When Margaux tracks down Jordan (now played by Briana Nicole Henry), she’ll want to know if a gun was recovered as well. They’ll work together on this case, so maybe they’ll uncover a few clues.

Of course, that’s exactly what Sonny (Maurice Benard) doesn’t want. He’d rather not have anything connecting him to this crime, but there’s bound to be some proof. GH spoilers state that Julian (William deVry) will be an issue, too. He just showed up to confront Sonny about the dead body, so things should get pretty heated.

Jason (Steve Burton) will eventually waltz over and get updates on all the drama. Maybe he can help Sonny and Julian reach some sort of agreement. It won’t be easy since there’s so much tension between these enemies, but Sonny has to do whatever it takes. Meanwhile, Kristina (Lexi Ainsworth) will lean on Sam (Kelly Monaco) for support. She’ll share some fears as her sis wonders what she wants.

Sam won’t want to overstep, but she’ll be willing to offer guidance if it’s needed. Kristina will talk about how afraid she is in Thursday’s episode. She’ll be fretting over Mike’s (Max Gail) condition and the jam Sonny’s in. When you’re part of the Corinthos clan, there’s always going to be a mess to worry about!

Other General Hospital spoilers say Ryan (Jon Lindstrom) will be hard at work. He’ll enjoy posing as Kevin (Jon Lindstrom) and fooling everyone in his path. We’ll see how long he can pull off his latest role! Over with Peter (Wes Ramsey), he’ll shock Lulu (Emme Rylan) with a huge assignment. Peter will feel like Lulu’s just the person to cover the Ryan Chamberlain story.

Lulu will be hesitant to accept the gig, but Peter won’t think she should pass this up. He may urge her to put any doubts aside and focus on her next chance at a big break. Regardless, the clock’s ticking on this offer. Peter will insist that he needs an answer right away.

Elsewhere, Robin (Kimberly McCullough) and Maxie (Kirsten Storms) will open up to each other. As you might expect, Peter will be their topic of conversation. After Maxie speaks about their shattered bond, she’ll wonder if Robin’s going to reach out to Peter. Maxie will try to figure out how Peter fits in Robin’s repaired family plan.

General Hospital spoilers say Robin indeed plans to bring her loved ones together. She won’t know how to achieve it, but she’ll hope to give Anna (Finola Hughes) and Peter a clean slate. What’s it going to take for peace? We’ll keep you posted as other GH news comes in. Stick with the ABC soap and don’t forget to check CDL often for the latest General Hospital spoilers, updates and news.