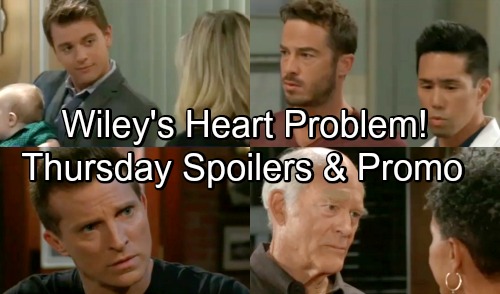 General Hospital (GH) spoilers for Thursday, September 20, tease that Michael (Chad Duell) will bond with another baby. He just spent some time holding “Wiley,” but James will be up next. After Michael runs into Maxie (Kirsten Storms), she’ll let him cuddle with her little one.

Michael’s excellent with kids, so Maxie will offer some encouragement. She’ll assure him that one day he’s going to be a great dad. Of course, GH fans know Michael’s already a father. He just doesn’t know that his son’s still alive! Perhaps “Wiley’s” health issue could speed up that revelation.

Something troubling popped up during the kid’s latest checkup. It looks like “Wiley” has some sort of heart condition, so Lucas (Ryan Carnes) will naturally be concerned. Carly (Laura Wright) was there when Lucas heard the news about “Wiley’s” test, so they’ll be discussing it when Brad (Parry Shen) arrives. He’ll immediately demand some answers about what “Wiley’s” facing.

If GH needs more medical info about the biological father, Brad’s plan could be in real jeopardy. He’ll have to worry about both “Wiley’s” health and the possibility of losing custody. Over with Ava (Maura West), she may have a slight change of heart. Ava had another fierce fight with Kiki (Hayley Erin), but there was a hint of regret in her eyes as her daughter stomped off.

Nina (Michelle Stafford) implied that Ava should repair the damage before it’s too late, but Ava wasn’t interested in her advice. However, Ava may consider taking it on Thursday. She’ll tell Julian that she won’t “lose her” because of Griffin (Matt Cohen), so she may shift most of the blame to her ex.

Meanwhile, Griffin and Kiki will remain overheated in their tank tops. The air conditioning isn’t working properly, but they’ll try to make the best of it. On Kiki’s sofa, General Hospital spoilers say they’ll gaze at a paper together. Kiki will suggest that she’s going to show Griffin a whole new world, so maybe they’ll be mulling over a takeout menu. She might have an exotic meal in store for him.

Ava will eventually drop by Kiki’s place and most likely hope to ease the tension. Instead, she’ll spot Griffin with Kiki and launch into another vicious tirade. At Charlie’s Pub, Julian (William deVry) will have a heart-to-heart with Jason (Steve Burton). He’ll bring up Sam (Kelly Monaco) and wonder just how deep Jason’s feelings are. Julian will hope Jason loves Sam enough not to pull her back into danger.

Other General Hospital spoilers say Mike (Max Gail) will seek a heartbreaking favor. He’ll want Stella (Vernee Watson) to help Sonny (Maurice Benard) let him go. Mike will think he should take the next step and move into a memory care facility. He’ll know it’s going to be hard, but he’ll feel like Sonny needs to get on board.

Finally, Jordan (Briana Nicole Henry) will give Sonny a warning. She’ll insist that the walls are closing in, so he’d better be ready. Jordan may want to give Sonny a heads-up in case he needs to protect Mike from the corpse fallout. She can see that Mike’s in bad shape, so she won’t want to make his suffering worse.