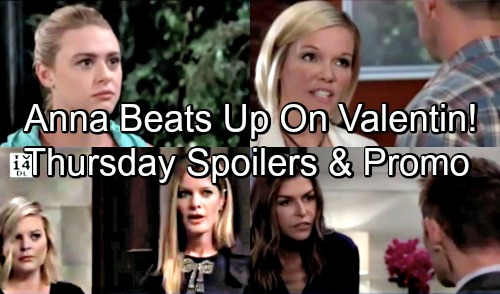 General Hospital (GH) spoilers for Thursday, September 6, tease that Anna (Finola Hughes) will give Valentin (James Patrick Stuart) a warning. She’ll express concern about him remaining in Peter’s (Wes Ramsey) orbit. Anna will insist that Valentin’s done enough damage. She’ll think he should just back off and leave Peter alone.

Valentin will argue that no one else is in Peter’s corner, but Anna will point out that she is. Since Peter’s pushing Anna away, Valentin won’t think she’s going to do him any good. They’ll bicker about what Peter really needs as Nina (Michelle Stafford) leans on Maxie (Kirsten Storms) for support.

GH fans will recall that Madeline (Donna Mills) recently died behind bars. It looks like Nina will plan Madeline’s funeral, but there certainly won’t be many attendees. Nina will note that her mother died and nobody cares. She won’t blame them since part of her doesn’t care either.

Still, Maxie will realize another part of Nina’s suffering. She’ll do her best to be there for her during this confusing time. Across town, Jordan (Vinessa Antoine) will drop a bomb on Curtis (Donnell Turner). He’ll process her news and admit that he didn’t see it coming.

It seems Jordan may have a plan to take care of their Stella (Vernee Watson) problem. If they can help Stella find love, maybe she won’t be as quick to stand in Curtis and Jordan’s way. For now, Stella will at least battle some guilt. During a chat with Mike (Max Gail), Stella will confess that she pushed things too far for too long. She may determine that she needs to dial down her rage for a change.

Over with Sonny (Maurice Benard), he’ll be worried about his father. Carly (Laura Wright) will suggest that Mike’s getting worse, so Sonny will have to revisit the memory care facility idea. How much longer can he keep putting this off?

Other General Hospital spoilers say Griffin (Matt Cohen) will bump into Kiki (Hayley Erin). He’ll talk about how Ava (Maura West) got him fired and could possibly do more damage. Kiki will be miffed with her mom’s behavior. She won’t think it’s fair that Ava’s getting her revenge and suffering no consequences in return.

They shouldn’t have kept their hookup a secret, but it’s not like Ava had a squeaky-clean record either. As far as Kiki’s concerned, Ava deserves the pain she’s feeling. The Jerome women will remain at odds in the coming weeks, so be prepared for some vengeful shockers.

Until then, Ava will meet up with Julian (William deVry). She’ll be glad to hear about Lucas (Ryan Carnes) and Brad’s (Parry Shen) victory in court, but she’ll eventually shift gears. Ava will promise that she’s not backing down from this fight. She’ll feel like Griffin’s the one who needs to be wary!