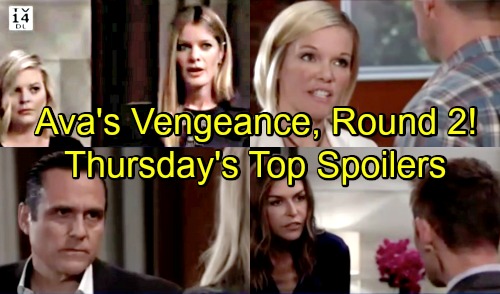 General Hospital (GH) spoilers for Thursday, September 6, tease that Mike’s (Max Gail) condition will be on Sonny’s (Maurice Benard) mind. He’s been worried about his father lately and that trend will continue. Carly (Laura Wright) will chime in with her thoughts on Mike’s recent deterioration. She’ll let Sonny know that Mike’s mental state is declining rapidly.

Carly won’t want to be harsh about this, but she’ll feel like Sonny needs to accept what Mike’s facing. She realizes Sonny wants to keep his dad close, but not if Mike poses a risk to himself and others. Sonny’s been dragging his feet on putting Mike in a memory care facility, but he can’t do that indefinitely.

While Sonny and Carly debate the next step, Mike will meet up with Stella (Vernee Watson). It appears she’ll discuss her “Jurtis” issues and how obsessed she’s been. Stella will express remorse about being so pushy. She’s been trying to drive Jordan (Vanessa Antoine) and Curtis (Donnell Turner) apart since she first hit town.

Stella clearly needs to focus on her own life for a change. General Hospital spoilers say Jordan and Curtis will nudge Stella toward her own love story this fall. We could see the first rumblings of that on Thursday. Jordan will give Curtis some stunning news, so she may be cooking something up.

Elsewhere, Valentin (James Patrick Stuart) and Anna (Finola Hughes) will clash over Peter (Wes Ramsey). Anna paid her son a visit, but it didn’t go as well as she’d hoped. Peter doesn’t want anything to do with Anna, but she intends to look out for him anyway. That means keeping Valentin at a distance if she can.

Anna will get in Valentin’s face and urge him to leave Peter alone. She’ll think enough damage has been done, but Valentin won’t be afraid of Anna’s criticism and threats. If he wants to assist Peter, he’ll assist Peter. It’s as simple as that. Valentin certainly won’t be interested in taking orders from Anna.

In the meantime, Nina (Michelle Stafford) will make an observation. As Maxie (Kirsten Storms) stands beside her, Nina will reflect on Madeline’s (Donna Mills) passing. She’ll declare that her mother’s dead, but no one seems to care about it. Nina will struggle with a mixture of tough emotions. She’ll feel both bitter and distraught, but Maxie will offer plenty of encouragement.

Other GH spoilers say Ava (Maura West) and Julian (William deVry) will catch up. After discussing Brad (Parry Shen) and Lucas’ (Ryan Carnes) custody win, Ava will admit that revenge has been sweet. She’ll hint that she’s not done, so Griffin (Matt Cohen) should beware. The same goes for Kiki (Hayley Erin)!

Speaking of Griffin and Kiki, they’ll cross paths in the park. General Hospital spoilers reveal that they’ll rant about Ava’s actions. Kiki will be especially appalled by how low her mom’s stooped. She won’t see why Ava should get to burn their lives to the ground without ramifications.

Griffin’s gotten the worst of it so far, but there’s still time for Kiki to take some hits. What blows will Ava deliver next? We’ll give you updates as other GH details emerge. Stay tuned to the ABC soap and don’t forget to check CDL often for the latest General Hospital spoilers, updates and news.