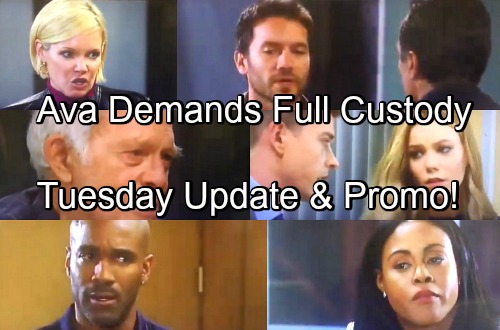 General Hospital (GH) spoilers updates for Tuesday, April 24, tease that Jordan (Vinessa Antoine) will have some difficult news to pass along. She’ll tell Curtis (Donnell Turner) that she finally went to the doctor for her persistent cough. Jordan will admit that a spot was found on her lung. She’ll worry that it could be cancer, but Curtis will want her to stay positive. He’ll even have a surprise that could help with that.

Curtis is supposed to pop the question soon, so he may decide to do it now. Perhaps Curtis will think all the wedding plans would be good for Jordan. It’d give her a goal to stick around for. Curtis couldn’t bear to lose Jordan, so he’ll refuse to let fear take control. He’ll want to support her through this and press on toward a bright future.

Other General Hospital spoilers say Dr. Bensch (James DePaiva) will once again criticize Kiki (Haley Erin). He’ll chew her out at GH and suggest that he was wrong about her potential. Kiki will be frustrated by Dr. Bensch’s unfair treatment. She’ll be convinced that her rejection is the reason for all this.

Across town, Ava (Maura West) will summon Scott (Kin Shriner) for a meeting. She’ll insist that she’s going to fight for full custody of her daughter. Avery (Ava and Grace Scarola) spent the night in a barn with a confused Mike (Max Gail), so Ava’s understandably upset. She never wants to go through that kind of terror ever again.

Ava won’t stand by and let Sonny (Maurice Benard) walk all over her. She’s not about to take anything from Carly (Laura Wright) either. Ava’s definitely ready for a war, so the Corinthos clan had better be ready, too. Back at GH, Michael (Chad Duell) will share his fears with Nelle (Chloe Lanier). He’ll gripe about the looming custody battle and suggest that it’s going to get ugly.

Nelle will offer comfort and make this crisis work in her favor. She’s trying to exploit every little weakness of Michael’s and she’s doing a great job of it. Nelle’s also been tormenting Carly (Laura Wright), so that’ll put the victim in Kevin’s (Jon Lindstrom) office on Tuesday.

Griffin (Matt Cohen) recommended this appointment and Sonny (Maurice Benard) backed him up. However, Kevin will urge Carly to explain her side of it. He’ll want the details of everything she’s dealing with so he can hopefully provide assistance.

Once Carly reveals all the Morgan (Bryan Craig) “hauntings,” will Kevin suspect she’s losing it? If he doesn’t now, he just might later! Nelle isn’t done, so Carly’s only going to get worse in the coming weeks. In the meantime, General Hospital spoilers say Dante (Dominic Zamprogna) will have updates for Sonny and Carly. He’ll indicate that there’s a problem at the police station.

Maybe Mike’s arraignment won’t go as well as they’d hoped. Mike will be a mess in Tuesday’s episode, so it looks like some heartbreaking moments are coming up. We’ll keep you posted as other GH details emerge. Stick with the ABC soap and don’t forget to check CDL often for the latest General Hospital spoilers, updates and news.