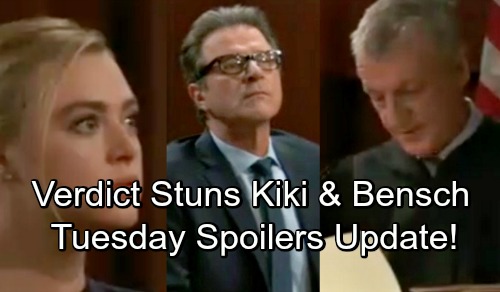 General Hospital (GH) spoilers for Tuesday, August 14, tease that Robert (Tristan Rogers) will start hurling accusations. He’ll confront Valentin (James Patrick Stuart) about what he’s done with Anna (Finola Hughes), but can he get the answers he’s seeking? There’s no guarantee that Valentin’s involved here, but the Cassandra (Jessica Tuck) connection will certainly point Robert in his direction.

Valentin made a suspicious phone call right before Anna’s kidnapping, so he may have something to hide. Robert will hope he can get to the bottom of all this, but you can bet Valentin will make things difficult. Elsewhere, Finn (Michael Easton) and Anna (Finola Hughes) will be puzzled as well. They’ll try to figure out who’s behind this operation and what he stands to gain from it.

Anna will grill their captor, but she’ll probably just get info on a need-to-know basis. This whole project is awfully mysterious. Meanwhile, Ava (Maura West) will argue with Franco (Roger Howarth). After she learned about the hookup, Ava turned Kiki’s (Hayley Erin) case upside down. She made Scott (Kin Shriner) expose the secret by asking Griffin (Matt Cohen) the sex question on the stand.

Franco will feel like Ava should’ve confronted Kiki privately instead of derailing the trial. He’ll undoubtedly rant about Dr. Bensch (James DePaiva) potentially getting away with his actions. This creep sexually harassed Kiki and could keep doing it if he doesn’t go down.

Ava was too furious to care, so Franco will deliver some harsh criticism. He’ll note that this is just a little taste of what Ava deserves. She slept with Morgan (Bryan Craig) and later contributed to his death, so Franco may not think she has the right to target her daughter.

Of course, it’s doubtful Franco will get through to Ava. She’s determined to seek revenge, so there could be more where that came from. At the courthouse, Kiki and Dr. Bensch will wait for news from the jury. GH spoilers say the judge will finally announce that the verdict is in. He’ll read it and seal Dr. Bensch’s fate, but will Kiki’s battle end in victory or defeat?

While Kiki finds out the jury’s decision, Liz (Rebecca Herbst) will get some horrible updates. The look on Griffin’s face will tell her something’s wrong. General Hospital spoilers hint that Griffin will come clean about the trial fiasco. He’ll fear that Alexis (Nancy Lee Grahn) can’t recover from that mess, so Liz will be concerned.

Across town, Carly (Laura Wright) and Michael (Chad Duell) will talk about funeral arrangements for Jonah. Since Michael’s in such a dark place, it’ll definitely be a tricky topic. Nevertheless, Carly will step up and give Michael the push he needs. She’ll be a good mom and support Michael when he needs her most.