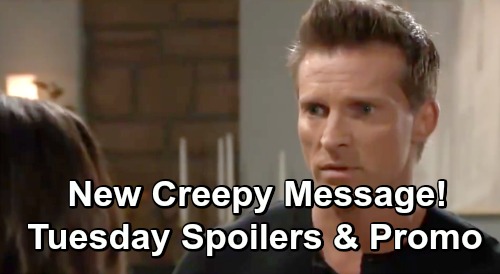 General Hospital (GH) spoilers for Tuesday, December 18, tease that Valerie (Brytni Sarpy) will wonder what Kristina’s (Lexi Ainsworth) is up to. She’ll develop some suspicions, but Kristina will do her best to ease her mind. During their next chat, Kristina will ask if Valerie trusts her. She’ll hope she can get Valerie on board with her latest plan, which might involve some strange cult activities.

While Valerie weighs her options, Chase (Josh Swickard) will shut down Lulu’s (Emme Rylan) questions. She’ll try to grill him about the murder investigations, but he’ll refuse to be her PCPD mole. Chase will insist that Lulu should back off and let him do his job. Finding the killer is what’s important here, not selling copies of The Intruder.

Other General Hospital spoilers say Cameron (William Lipton) will meet with Cole (Nick Alvarez), a drug dealer from his school. Cole will contend that they should make the weed transaction as planned. Of course, Cameron already had second thoughts and called off the deal. He’ll once again argue that it’s not going to happen, but Cole will be awfully persistent.

At home, Franco (Roger Howarth) will fill Liz (Rebecca Herbst) in on the brownie drama and the texts he found on Cameron’s phone. He’ll feel like Cam’s getting into drugs, so they’ll discuss how they should handle it. Unfortunately, a call from the police station will interrupt them. Cameron will be detained there, so it seems Cole will drag him into trouble after all.

Over with Jordan (Briana Nicole Henry), she’ll wonder why Margaux (Elizabeth Hendrickson) is suddenly defending Sonny (Maurice Benard). Margaux will fire back that Sonny has nothing to do with this. She’ll have a new lead she’s following, but she won’t think Sonny is involved at all.

Of course, there’s more to it than that. Margaux has been bonding with Sonny and just might be falling for him. GH fans will be anxious to see where Margaux and Sonny’s connection goes from here. Across town, Sam (Kelly Monaco) and Jason (Steve Burton) will ponder another ominous email from Linda Black. Since that was an old alias of Sam’s, this person clearly knows too much and could cause issues.

Jason will reiterate that he’s going to help Sam handle this and put it behind her. He’d much rather focus on their romance, so they’ll try to get Sam’s past out of the way ASAP. At Turning Woods, Marcus (Nigel Gibbs) will want to call the police. Both Mike (Max Gail) and Yvonne (Janet Hubert) have gone missing, so Marcus may argue that Mike abducted his wife and took her who knows where.

Sonny will suggest there’s no need to get the cops involved. He’ll probably argue that Yvonne and Mike could be in some corner of the memory center. There are strict security measures in place, so maybe they just have to look a little harder. Then again, Carly (Laura Wright) escaped from Ferncliff multiple times like it was nothing. Secure soap facilities are never as secure as they claim!